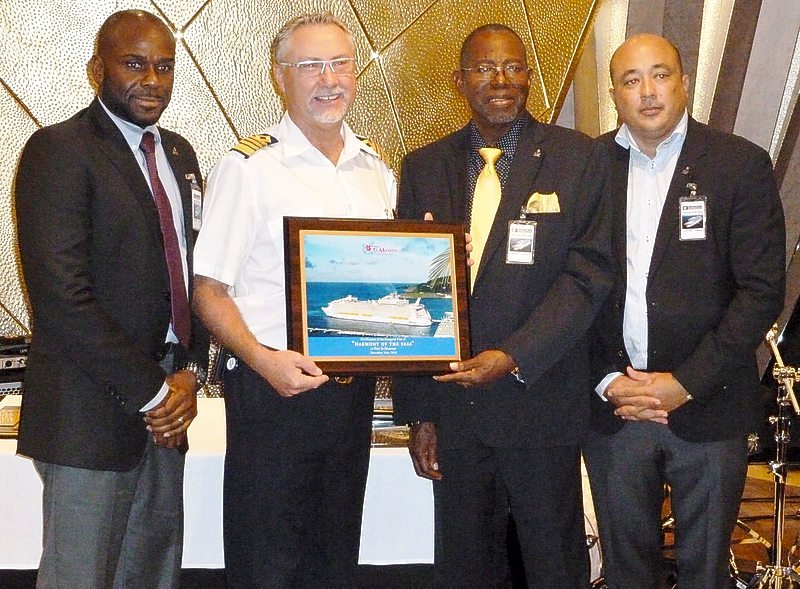 PORT ST. MAARTEN – Harmony of the Seas Captain Johnny Faevelen welcomed the Port St. Maarten delegation and stakeholders on Wednesday morning during the vessels inaugural visit to the destination. Harmony of the Seas was one of four Royal Caribbean vessels in port with 6400 guests on board and 2300 crew.

Captain Faevelen referred to Sint Maarten as the happy island pointing out that promoting the destination as the ‘Friendly Island’ was different, but reflected how the people felt about themselves and that this sends the message that island people are easy going and there wasn’t a problem that couldn’t be solved.

He added that Royal Caribbean believed in the island and that the rest of the Caribbean should learn from the destination.  He was full of praise for port officials where it concerned the development of the port, where it was very easy to dock vessels; it was an accessible and convenient port for passengers and crew members, and that other islands had a long way to go on how to properly build a port.

The Captain pointed out how important crew members were to a destination, adding that they provided information to guests about what to do and where to visit, and he thanked Sint Maarten for taking good care of the crew members from Royal Caribbean vessels that call at the destination on a weekly basis.

CEO Mingo thanked all present at the ceremony which included ship agent S.E.L. Maduro & Sons, the St. Maarten Dutch Taxi Association among others for making destination Sint Maarten a success which keeps the cruise industry coming back, adding that Royal Caribbean accounted for about 60 per cent of the business that the island receives annually.

Port St. Maarten representative responsible for General Affairs Hector Peters, presented Captain Faevelen with a plaque and thanked him on behalf of the Government, Port St. Maarten Management and Supervisory Board for visiting the destination, and wishing the passengers and crew a hospitable stay.

Captain Faevelen has been working for Royal Caribbean Cruise Line since 1975 and has worked on all Voyager class vessels.

The fourth new cruise vessel on its inaugural call for the month of November will be Harmony of the Seas, the newest addition to Royal Caribbean’s award-winning Oasis Class fleet which will dock on Wednesday, November 16.

Port St. Maarten will be welcoming the new vessel to its shores on Wednesday with the traditional plaque exchange and words of welcome.  There will also be six cruise ships in port on Wednesday, the first of two six-ship days in November.  The next one will be on November 30.

The new cruise ship was built over a 32-month period at the STX France shipyard.  Considered the largest and most innovative cruise vessel afloat, costs more than US$1 billion to construct and is the 25th ship in the Royal Caribbean fleet.

In November 2016, Harmony arrived at her homeport of Port Everglades, Fort Lauderdale, FL., from where it is offering seven-night eastern and western Caribbean sailings.