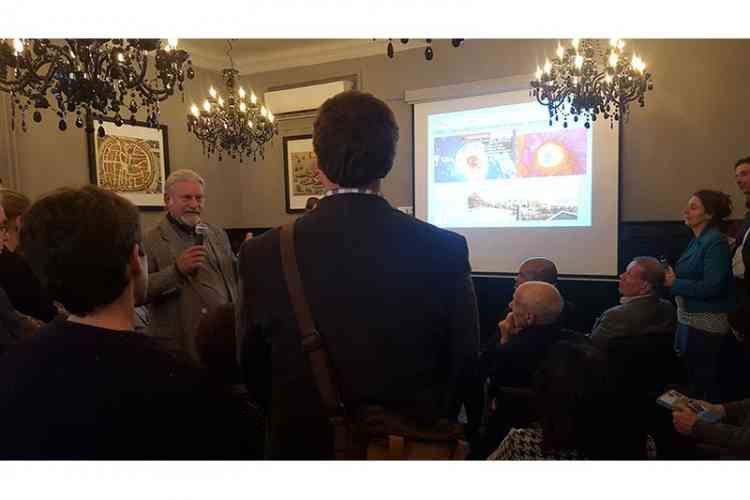 Archaeologist Jay Haviser delivers a keynote address at the UNESCO-Leiden University debate in The Hague.

Dr. Corinne Hofman outlined in her introduction at the event the impacts of the storm in broader aspects of Caribbean heritage preservation, ranging from archaeology to archives, as well as the complications of early-response short-term planning and long-term necessities for rebuilding the islands.

Tijen Fooh discussed the vulnerabilities of national archive collections in such a natural crisis, and the need for preparatory training in dealing with preservation efforts, using examples from Carbica case studies.

Haviser used the specific case study of St. Maarten to illustrate what occurred before, during, and after Hurricane Irma with a look at successful and unsuccessful efforts to deal with the crisis.

He proposed two potential high-priority target projects for urgent attention and long-term goals of St. Maarten: a public-private partnership to develop Fort Amsterdam into a quality heritage destination and Government’s response to the loss of/damage to the country’s library, museum, archives, and archaeology centre. The second goal is the creation of a single multi-functional facility to house all four institutions.

Haviser told the gathering of some 70 persons that all those who survived the ravages of Hurricane Irma are now “Irma’s Children, birthed from a traumatic experience where a chaos in their tangible world impacted the core of their intangible world.”

The presentations were followed by a cocktail-debate with delegates from Dutch ministries and institutions, the Cabinet of St. Maarten, and representatives of several Dutch Caribbean islands, moderated by Yvonne Zonderop.

Some key points of the debate were the need to develop more regional Caribbean and international connectivity, for both logistics and information about catastrophe conditions and reconstruction approaches. It was further highlighted that the future of the Caribbean will demand more public-private cooperation initiatives for the stabilisation and sustainable reconstruction of the islands.