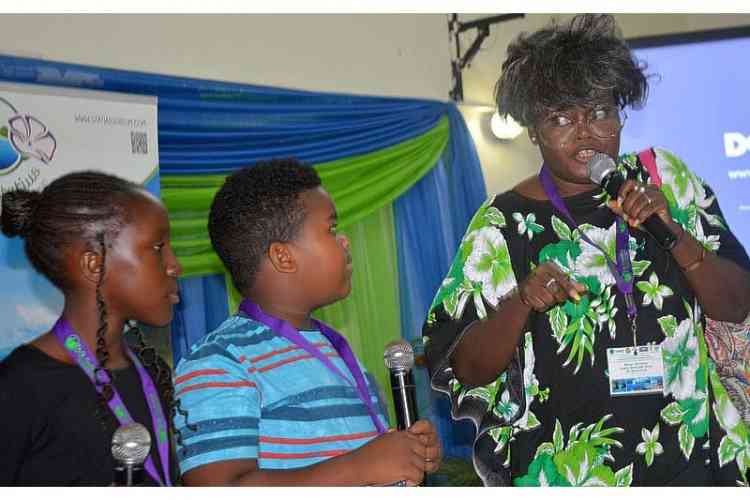 Misha Spanner and some of the youth members of the Simon Doker Club performing a skit at the Statia Sustainability Conference. Her drama revolved around an elderly aunt who loses her wig yet is taught by children to eat local Statian foods that have medical cures and energy-giving properties.

ST. EUSTATIUS–Health and the conditions that promote it are essential for St. Eustatius if it is to present itself as a tourist destination. This point was made quite clear by three speakers at last week’s Statia Sustainability Conference. Dr. Teresa Leslie of the Eastern Caribbean Public Health Foundation left no doubt as to the challenges that still face the island. Her foundation is involved with various areas of health-related activities such as mosquito surveillance and rat control and runs a yearly global health field school. She is also collaborating with the small start-up company VectorAnalytica to introduce innovation when collecting and analysing environmental data that can influence health.

“The Caribbean is the world’s most tourist-dependent region,” Leslie told her audience. “Health and wellness should, therefore, be a priority for all stakeholders. We do not know what we have until we lose it.”

“The social and economic stability of the Caribbean depends on secure and thriving relationships between people, animals and the environment that is encompassed in the ‘One Health Model,’” she stated. “Such an integrated approach will sustain the vitality of a health and wellness for residents as well as tourists.”

“Statia has a wealth of natural assets from the food we grow locally to the landscapes that surround us above and below our crystal blue waters. If we are to appeal to health-style minded tourists, there are still many great things we have to do to shake up and shape up.”

Leslie stressed that the health of people was connected to the health of animals and the environment. “The recent tragic earthquake and tsunami in Indonesia are a clear example of how fragile the tourism industry may become. Last year, and very close to home, the effects of Hurricane Irma were and still are a testament to our vulnerability.”

“We need to work at the local, regional, national, and global level with the goal of achieving optimal health outcomes. By recognising that interconnection between people, animals, and the environment, we can build a solid foundation that can be sustained, marketed and enjoyed. These ideals can be achieved through practical steps. Reputation in the tourism industry is based on satisfying expectations and for the Caribbean, that requires preparation.”

Leslie explained that this preparation would involve early work to identify bacteria and viruses that could jump between species. “Greater efforts to control infectious diseases of animal origin are desperately needed around the world. On Statia, we also have to be alert. Tourists do not want to be confronted with diseases having animal or environmental origins and neither do the people who reside on this beautiful Golden Rock!”

Conference participants learned that some improvements in health and wellness had stemmed from the new waste management facility in Zeelandia. Jeffrey Lewis who is responsible for the facility described how the dump had been cleared and the grounds restored to natural landscaping. “We are now collecting, separating and recycling effectively,” he announced during his presentation: Statia the New Perspective. “Illegal dumping on Statia is not a right but now a crime for which dumpers will be pursued and fines collected.”

“We have also made progress with recycling. In Europe, 70 per cent of waste is recycled and that is our aim. On Statia, glass is now crushed before being exported to St. Maarten for recycling. The cost of this shipment is paid for by the market and not the facility,” he stressed.

Lewis also informed participants of the conference that these improvements had been made possible through working closely with government and organisations such as St. Eustatius National Parks STENAPA and St. Eustatius Utility Company STUCO.

Gregory Melfor is a Unit Manager for St. Eustatius Island Government. Melfor delivered a speech that embraced various psychological and social lifestyle components that could be of appeal to tourism.

“St. Eustatius offers an island where tranquillity and rest are inspirational,” he said. “We all take rest for granted but it is a powerful force. It not only empowers us to perform at our best, but it is an antidote to the stress and nervous nature of our daily work.”

Melfor explained to a large conference audience that he often escaped to take his rest in a cave in Zeelandia. “My cave provides me with vitality. The Historical Gem is a superb tourist environment for rest and inspiration. Mind, body and soul are truly enriched by the peaceful and calming influence of our physical landscape,” he remarked.

However, Melfor insisted that residents on the island also had a responsibility to care for that physical landscape. “Our external world does influence our individual wellness. For that reason alone, we need to keep our yards clean if only to deter infectious diseases. We must also keep our bodies in shape through regular exercise. If you do not use it, you lose it.”

Melfor made good mention of the exercise machines that had been installed at the sports complex. “We have to keep mind and body in balance,” he insisted. “Mindset is all about awareness and appreciating what we have. We are all made differently but we all have the choice to pursue a healthy life.”