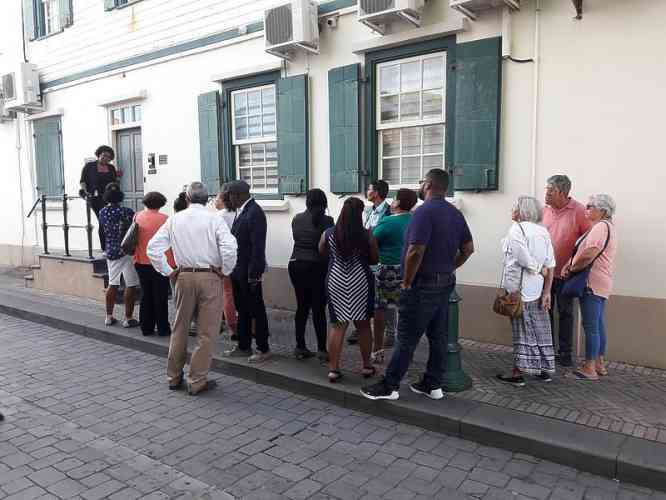 Family members and supporters of suspended Member of Parliament Theodore Heyliger gathering outside the Courthouse on Thursday evening.

PHILIPSBURG–The Court of First Instance will be hearing the “Catfish” case, in which Member of Parliament (MP) Theodore Heyliger (48) and co-suspect J.M.S. (70) are the main suspects, presumably on May 30, the Judge said during Thursday’s preliminary hearing.

In the investigation Heyliger and S. are both charged with having attempted to bribe former Member of Parliament (MP) Romain Laville in or around the period of September 1, 2012, to July 25, 2013.

The suspicion is that both suspects made various promises to Laville with the intention that he would give up his seat in Parliament, thus withdrawing support for the then-Wescot-Williams II Cabinet.

Sums of money of US $135,000, $250,000 and $350,000 are said to have been promised to Laville. A parcel of land for Laville or members of his family, as well as a post as Minister of Tourism, Economic Affairs, Transport and Telecommunication (TEATT) in the new Cabinet to then be formed were also promised, according to the Prosecutor’s Office, all of this if Laville “obliged by giving up his seat in Parliament.”

Sulvaran also filed a case against Heyliger’s indictment, to which the Joint Court stated it had no objections.

In the meantime, Heyliger has been transferred to the prison in Bonaire, where he is being held in preventive custody for 60 days. He witnessed Thursday’s proceedings via video-conferencing with some 30 family members and supporters attending the proceedings from the public gallery.

During the proceedings, Sulvaran presented a preliminary defence in which he stated that Heyliger’s “fundamental” right to be present at his trial had been violated and that his “abduction” to Bonaire was illegitimate and in violation of his client’s human rights.

These violations of his client’s rights should lead to the Court declaring the Prosecutor’s case against Heyliger inadmissible, the lawyer stated.

After the Judge rejected the preliminary pleadings, the Prosecutors read out the indictments, in which they indicated that S., who was not present but was represented by his attorney Geert Hatzmann, is considered an accomplice.

Whereas the Prosecutor’s Office did not request any additional investigations, Sulvaran requested a copy of the Bada-Bing case file in which Laville had claimed the UP had attempted to bribe him to break the coalition. In this case a video emerged allegedly concerning a payment of $135,000 to persuade Laville to return to the UP.

He also wanted to hear four UP party members, among them Jules James, Sylvia Meyers and Leroy de Weever.

In stating that the High Court attaches high demands where the motivation of additional investigation is concerned, the Judge allowed the defence to study the Bada-Bing case file where it concerned the statements provided by Van den Heuvel and Illidge pertaining to the alleged bribery.

However, it may very well be that lawyer Sulvaran, while reading the statements in the Bada-Bing file, would decide to request that the Court hear Van den Heuvel and Illidge as witnesses in the Catfish case, it was stated Thursday.

The Judge said Heyliger should be transferred to St. Maarten to be able to attend his trial in person, if he is still held in pre-trial detention in Bonaire at that time.