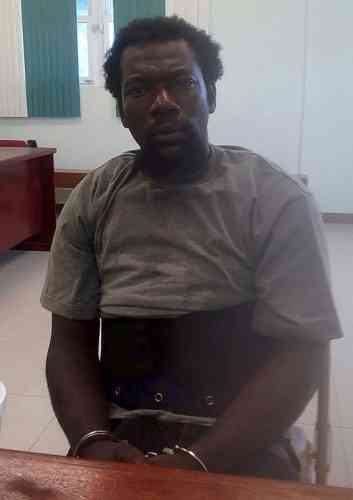 PHILIPSBURG–The hearing in the so-called “Mars” investigation involving the murders of Luis David Sarante Diaz and Erwin “Eggy” Rosario Contreras on December 5, 2016, was postponed Wednesday for a third time, now until June 13.

Sarante Diaz and Rosario Contreras were both murdered in a hotel room. Their mortal remains, the Prosecutor’s Office believes, were found in the waters of Belair lagoon in August 2017.

Five suspects were arrested in this case. Three of them – Kathron Fortune (40), T.J.F. (28) and K.K.K.S. (31) – were led in front of a Judge for a pro-forma hearing on Wednesday. Two other suspects in this case are currently not detained.

Fortune was heard via video-conferencing as he is currently detained in the Netherlands, serving a 21-year prison sentence for the murder of Ervin Margarita in 2006.
His trial, and that of his two co-defendants, were all postponed as the investigations in this case are still ongoing.
The mortal remains of the two bodies found in Belair, primarily consisting of bone fragments, were transported to the Netherlands for investigation by the Netherlands Forensic Institute (NFI).

Experts from abroad also still need to investigate some 20 to 30 confiscated data carriers, among which are cellular phones, the Prosecutor explained. There are also suspects and witnesses still to be questioned.
The Judge granted the delay in the handling of the cases and said that requests for the defence need to be submitted to the Court no later than four weeks after the final version of the casefile has been received.

Fortune, who is considered a dangerous convict, observed the proceedings in a poised and calm manner, and addressed the Court respectfully.
His case was handled in the morning, whereas the other two suspects were led before the Judge in the afternoon. Their hands were also cuffed as they were escorted into the downstairs Flamboyant Court Room.

According to the Prosecutor, T.J.F. initially made a false statement to the police, and later appealed to his right to remain silent, or said he could no longer recall. His co-suspects, however, stated he had played a role in the victims’ death. These statements match with forensic evidence, the Prosecutor claimed.
Attorney Safira Ibrahim refuted the Prosecutor’s statement that her client remained silent. “My client answered to questions and maintained his first statement,” the lawyer said.
She said her client, who worked as a security guard was a “quiet man,” who looks after his mother and sister.

The Prosecutor drew a totally different character sketch in stating that T.J.F. had confronted K.K.K.S. quite aggressively during an accidental meeting on Wednesday morning.
According to the Prosecutor, K.K.K.S. had made an incriminating statement about T.J.F.’s involvement in this case.
K.K.K.S.’s lawyer Geert Hatzmann said the investigations in his client’s case took much too long as she was arrested in February 2017.
Both lawyers filed requests to terminate or suspend their clients’ pre-trial detention. Hatzmann said his client had cooperated with the investigations in providing incriminating “key information” about the other suspects.
The lawyer said his client had witnessed the “gruesome” crimes. Her ex-partner and the mother of his son had invited her for a party, which had turned into a “very macabre Halloween 2.0”

He said his client knew that Fortune wasn’t a “good boy.” She was confronted with that in the hotel room. “She could not avoid that,” Hatzmann said in announcing that he would be pleading psychological circumstances beyond his client’s control.
“She is not a murderer, she should be released,” Hatzmann said of his client, who listened to the proceedings with her head bowed. He said his client – a “small, weak woman” – could be sent to a “safe house” in Curaçao or Aruba, or even in the Netherlands.
“It is sad that she decided to become involved with people like this, and she’s paying for it for the rest of her life,” the lawyer said.

He wondered why so much distinction was made between his client and the driver of the vehicle in which the mortal remains were transported, who is not held in detention.
The Prosecutor’s Office objected to requests to set the suspects free pending their trials. The Prosecutor holds K.K.K.S. for an accessory to double murder, which, he said, was executed in a “brutal manner.” These are “atrocious” crimes, the Prosecutor said. “The bodies were dumped in the lagoon to prevent discovery.”
K.K.K.S. had been involved with the other suspects for at least a couple of hours during the day of the murders. The Prosecutor said he sees chances for a conviction of being accessories to murder for all three suspects.

The Judge turned down requests to suspend or lift the pre-trial detention of suspects and said that being an accomplice to murder is also a serious crime.