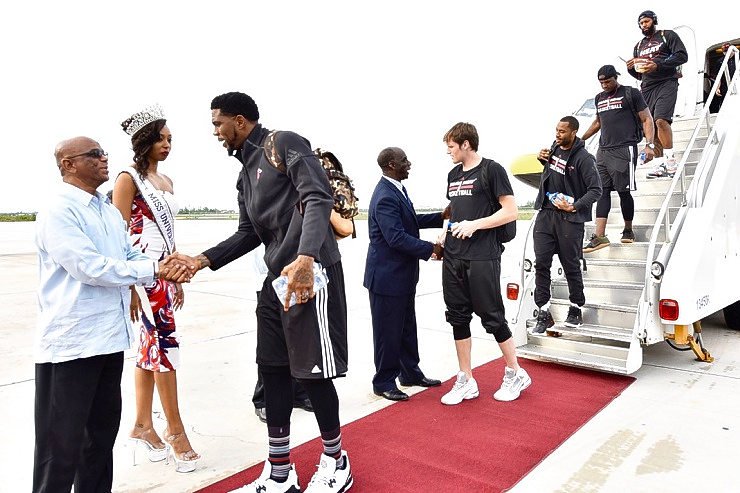 NASSAU, Bahamas–The Miami HEAT trained for the upcoming NBA season in the Bahamas over the weekend. And the three-time championship team received a uniquely Bahamian welcome when they touched down in New Providence.

A few of the players danced to the Junkanoo music as they disembarked the aircraft at Odyssey.

Colours Junkanoo Group put on a colourful performance complete with a special banner with the words, “The Island of The Bahamas Welcomes Miami Heat.”

The team conducted two-a-day practice sessions at the Atlantis Resort’s conference room, which was transformed into a basketball court.

This is the second time that the Miami HEAT has held a training camp in the Bahamas. The team previously held its training camp at Atlantis ahead of the 2013/14 season. The Bahamas is the first and only destination to host a HEAT training camp.

Senior Director of Sport Tourism Greg Rolle said Thursday that the team’s decision to return to Nassau speaks volumes about the attractiveness of the destination.

“For the Miami HEAT to ask us to come back to the Bahamas for the second lap, that shows the level of friendship and partnership that we have with them and that also shows everyone that on the first lap in 2013, we did an incredible job for them to say they want to come back again,” Rolle said.

Rolle added that the Miami HEAT’s trip in 2013 helped to boost visitor arrivals in the last quarter of 2013 and resulted in millions of dollars in advertisement for the entire country.

“We got US $20 million in free publicity because of that exposure,” he said. “And when you think of what that one little trip did to turn our country around and put us on different footing that shows you the power of sports. That itself created a paradigm shift that we had not seen in a long period of time.”

Rolle said he expected similar results this time around.

The Miami HEAT has an ongoing multi-year partnership with the Ministry of Tourism. ~ Caribbean360 ~

Source: Daily Herald
Heat – not just the weather kind – in the Bahamas