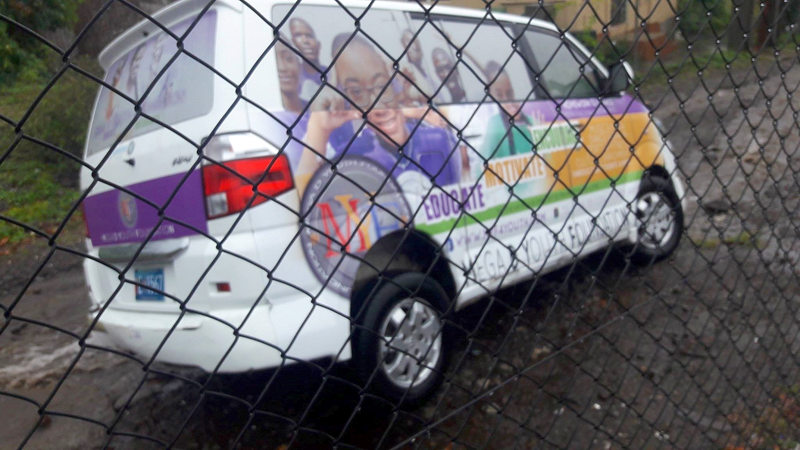 ST. EUSTATIUS–The heavy rains that hit St. Eustatius last week Wednesday, Thursday and Friday, have urged the Directorate of Economy and Infrastructure to issue a public advisory as to the condition of the island’s roads, which have been significantly affected with erosion and debris.

The heavy rains caused flooding at various homes and businesses, among which were the school programme building and the tax office. The bad weather also caused a motor vehicle incident, as well as flooded roads.

The Principal of Bethel Methodist School stated that the road behind the school had been washed out, and that it was not safe to drive on. He advised parents of pupils to avoid using the back road while driving to the school.

The advisory sadly did not reach the driver of an after-school programme bus. While the driver was making his way on the road, the vehicle slid into a ditch that had formed because of the water erosion, become stuck and caused bus to lean on its side.

The Caribbean Netherlands Fire Department was called out to assist the bus driver, but before they arrived, the bus had already been removed by a “Good Samaritan.” The Fire Department cordoned off the area for safety reasons.

As water started to enter the building of The Daughters of the King after-school programme, the children at the programme were sent home.

Flooding also occurred at the Tax Office. The building was inaccessible and was closed for three days. Currently, the tax office is open to the public again.

Theodore A.M. Pandt Road, the road to F.D. Roosevelt Airport, flooded out as the storm-drain trench and the road were both submerged. Persons driving their vehicles on the road were not able to distinguish what was drain and what was the street.

Two apartments in the same area experienced water entering their buildings because of the rain. Many homes on the island experienced water running into their homes. Some said they did not have water problems like this in a long time.

The Directorate of Economy and Infrastructure issued an advisory to the public, stating: “With the heavy rain over the past days, several of the roadways on the island have been significantly affected with erosion and debris.”

The Department is currently evaluating the damages and will be doing some short-term repairs to facilitate accessibility. They advised residents using the roadways to consider this and exercise extra caution on the road.

Persons, who have been significantly affected by these damages, can call the office of Economy and Infrastructure at tel. 318-3283 to notify the Department, or in more urgent matters to call tel. 318-1036.