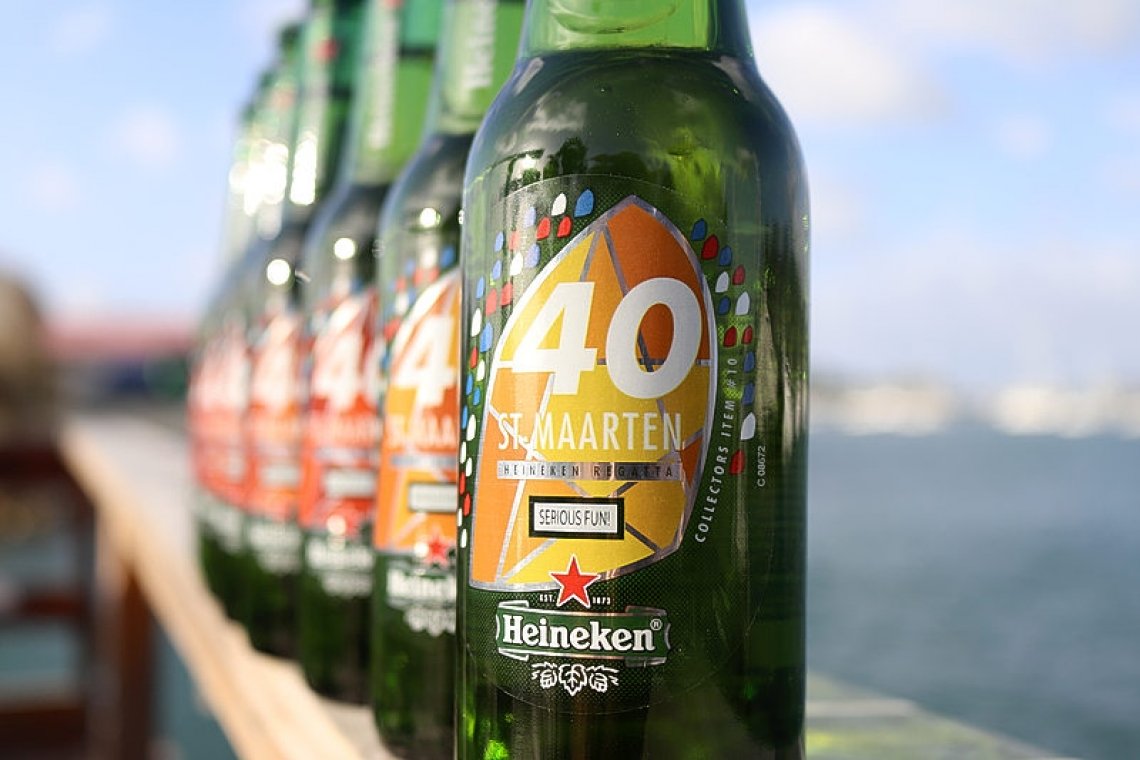 COLE BAY–Heineken launched the fortieth St. Maarten Heineken Regatta limited-edition bottle collection on Tuesday, marking the sixth year in a row that the Dutch beer company has produced a special bottle exclusively for the event.

“Each bottle is uniquely designed, coloured and labelled from numbers one to 40. These limited-edition bottles will be available for purchase for a limited time in leading supermarkets, bars and restaurants, starting from this week.

“Heineken stays close to St. Maarten and its people. There are not many places in the world that have such a close relationship with a big international brand like what we have with Heineken in the Caribbean. We consider ourselves extremely lucky that Heineken appreciates St. Maarten, its neighbouring islands, the Regatta and the Heineken legacy that has been in the Caribbean for so long,” said St. Maarten Yacht Club Regatta Foundation General Manager Michele Korteweg.

This year’s label also features 40 smaller sail shapes surrounding the event logo. The sail shapes are in red, white and blue, which represent the colours of the flags of both sides of the island.

“Every year the packaging changes to resemble the event, and what remains the same is quality beer and refreshing taste. The St. Maarten Heineken Regatta bottle contains the same premium Heineken Pilsner beer from Heineken’s brewery in the Netherlands. These special edition bottles were bottled on January 16 and they are already in the stores two weeks later,” said St. Maarten Heineken Regatta Production Director John Leone.

“Heineken’s Regatta bottle is a clear demonstration of the long-lasting relationship between the event and the brand. Heineken became the title sponsor of the St. Maarten Heineken Regatta in 1983 and has helped to evolve the event.

“The Regatta’s 40th anniversary marks a special time for the partnership, and it is beautifully reflected in the 40 different-coloured labels, also representing the diversity of cultures and people on our beautiful island.

“We are proud to have built such a special connection with Heineken and its international brand team, where St. Maarten and the Regatta have been given the opportunity to highlight their uniqueness through the iconic Heineken bottle.

“It’s also pretty spectacular that there are 40 different-coloured labels. We would like to encourage persons to collect all 40 to capture the beauty of the colour gradient,” said Heineken Brand Manager at Divico Distributors, Tanvi Goklani.