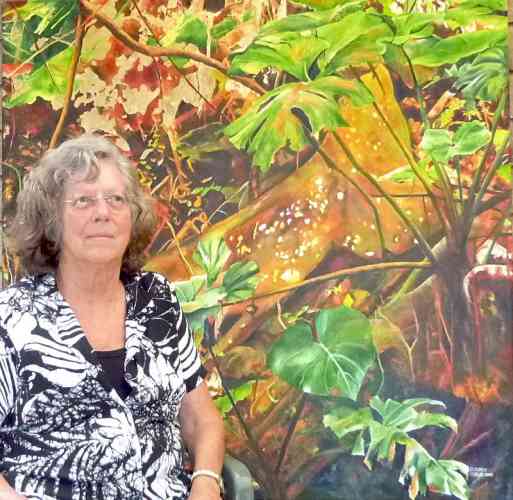 SABA–Artist Heleen Cornet will be displaying her “Golden Elfin Forest” exhibit at Five Square Art Gallery in Windwardside from Saturday, March 24, until Sunday, April 8. The exhibition will be opened by Island Governor of Saba J. Jonathan Johnson at 5:00pm.

Cornet’s latest work was inspired by Annette Herfkens’ book Turbulence: A True Story of Survival, in which she describes the golden glow she saw in the jungle of Vietnam in a near- death experience after surviving a plane crash.

Herfkens is the sole survivor of Vietnam Airlines Flight 474 which crashed into a mountain on November 14, 1992, in Vietnam. She survived eight days with multiple injuries and sustained herself only on rainwater. In 2014, Herfkens, who was born in Venezuela to a Dutch family, published the memoir recounting her experiences.

With the use of gold leaf Cornet expresses in her paintings the ethereal feeling she herself has been experiencing at sunsets in the Elfin Forest of Saba.

Cornet was born in the Netherlands but has been living in the Netherlands Antilles since 1974. First year in Curaçao, then nine years in Bonaire, followed by one year in St. Maarten. Since 1986 she lives in Saba. She has always been inspired by the tropical beauty of the islands and produced more than 800 paintings and published several books.

On Saba, Cornet mostly worked in watercolour but after a study in Holland on oil painting she switched partly to that medium.

She made underwater paintings and a series about the cottages of Saba and historical buildings of St. Eustatius. The mystical cloud forest at the top of Saba’s Mt. Scenery, where she used to camp with her husband Tom van’t Hof, has also been a source of inspiration for as long as she has been living on Saba.

Cornet’s work was on display in San Paulo, Brazil; Stockholm, Sweden; in Paris and Cagne-sur-Mer, France; Venice, Italy; New York, United States; in Curaçao and the Netherlands, and of course, several times at the local gallery in Saba.