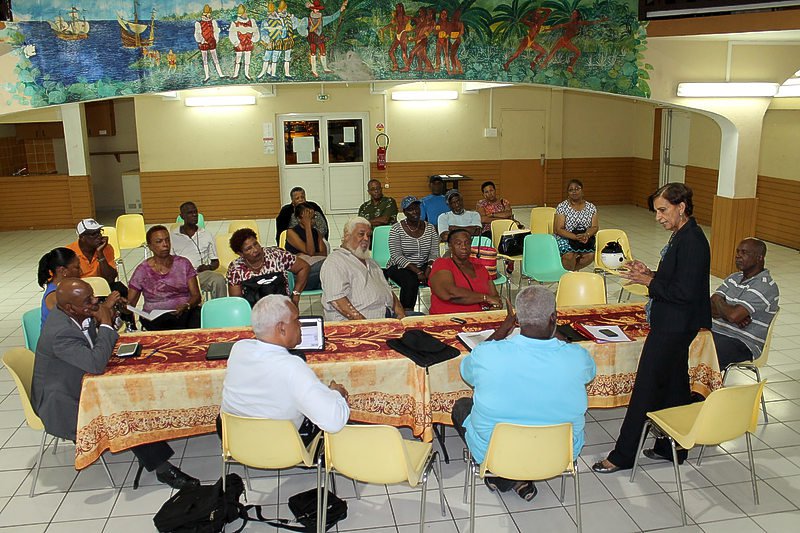 Former President of Parliament Sarah Wescot-Williams gives her input at a meeting on the ongoing negotiations to obtain pensions for seniors who worked on the Dutch side in the 1970s.

MARIGOT–Raymond Helligar, the man who is spearheading the fight on behalf of the now so called “border workers” from the French side who are fighting to get their full pensions paid for the years they worked on the Dutch side in the 1970s, said he found a recent meeting with SZV and a mixed commission from the Ministry of Social Development and Labour “very encouraging.”

To be better armed for negotiating, Helligar formed the Collectif des Anciens Travailleurs Francais de St. Martin which has the full support of the St. Maarten Seniors and Pensioners Association.  He also disclosed the cause has been taken up by the Caisse de Retraite in Guadeloupe as well as the Department of Social Affairs on the French side headed by Vice-President Ramona Connor.

Workers for the most part have been unable to obtain pensions based on the deductions taken off their salaries because the law on the Dutch side needs to be changed. Some files were rejected and some went to court. There is also the added complication of many of the workers being denied or had pension reduced because they were listed as being resident on the French side.

“Based on that meeting with SZV and the commission we will now assist in writing an advice that could result in a temporary solution in terms of a part payment,” Helligar said at a recent meeting with Collectif members and Raymond Jessurun from the St. Maarten Seniors and Pensioners Association. “I did feel somewhat insulted to be accepting that but I swallowed my pride as at least you would get something now and old folks are dying off so fast.  But it’s not going to stop us going all the way to continue the battle. One of the other things that will have to change is that the information collected cannot be used because of privacy issues, and that again requires a change in the law. But this at least could be a breath of fresh air.”

Former President of the Dutch-side Parliament Sarah Wescot-Williams at the meeting said she had been addressing for years the issue of those workers who started to receive a pension from working on the Dutch side but when they resided on the French side their pension was reduced.

“When I approached SZV in 2014 about the fact that French St. Martin could not be considered as foreign territory where residency is concerned, they told me I was wrong,” she explained. “But earlier this year through the efforts of Glen Carty I got the opportunity to sit with the administrators and lawyers for SZV, and in explaining my case again they came to the conclusion that something was wrong. And where it went wrong is when we took over the social security laws from the Netherlands Antilles.

“In order to undo that, to stop the reduction because you live in St. Martin, SZV has now acknowledged it needs to be corrected in the legislation on the Dutch side to make it equal again. The proposal to get it changed concerns articles 40 to 43. SZV admitted it was an oversight.”

She added: “They regard French St. Martin in the sense of the pensioner leaving the territory (of St. Maarten) the same as if you leave to go to Jamaica or anywhere else. The same thing applies and that’s where the problem is.”

Raymond Jessurun has been instrumental in advising the Collectif to base its arguments on discrimination and violation of human rights with the various international treaties used to back up the arguments. According to Article 5 of the Treaty of Concordia “all commodities of the island shall be common and shall serve to provide the wants of the inhabitants.”

“We wanted to address the issue at this meeting through the spirit of the Treaty of Concordia. But this beautiful unity idea is actually not in the spirit of the Treaty because when you look at the Treaty closely it is about accepting that there is a division, accepting that there are two states, and there is Soualiga,” he explained. “Workers in Soualiga are not being treated equally and from a human rights perspective we are in this trouble together. Authorities in the Netherlands and France are keeping us divided and unequal.”