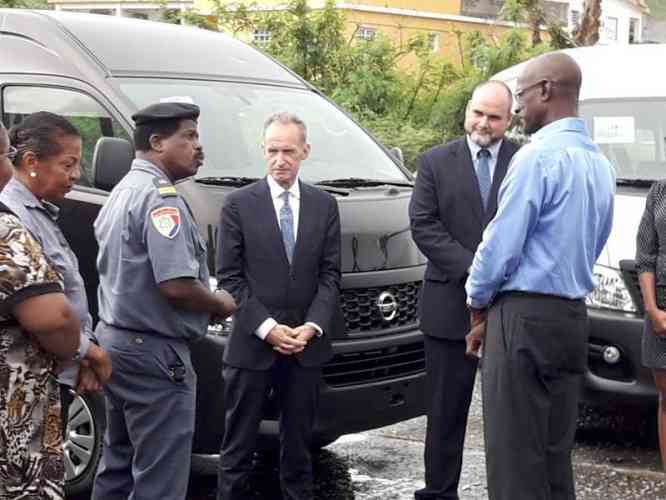 COLE BAY–Helping Hands Foundation is today celebrating its 21st anniversary helping the elderly in the country and hopes to mark many more years helping seniors.

The Foundation began unofficially in 1996 and officially in 1997. It was the vision of Lucille Jacqueline James, a medical assistant and former secretary at the then-temporary police school in St. Maarten. James decided to follow her dream and help senior citizens with transportation service.
She began transporting seniors using her own vehicle for those who needed the assistance. She transported them to their doctors’ appointments, to collect their pensions and even took them shopping. These services increased through word of mouth. Helping Hands Foundation was officially established on January 10, 1997, by a board that was formed at the time.
In 2001 the White and Yellow Cross Foundation noticed the work James had been doing and she was asked to take over their services. The foundation’s first bus, a 16-seater, was funded by Sofna, Windward Island Bank and Landsloterie, and was operated by Clarice Ellis and James herself behind the wheel.
“We were able to get a wheelchair bus which helped us transport more seniors and the disabled,” James said. “Some years later we were able to add the transportation of seniors to recreational centres on a daily basis. Besides that, persons with Alzheimer’s disease were also transported to the clinic on a daily basis. Amputees and others are transported to the St. Martin’s Home where they receive therapy.
“We also offer the service of transporting persons to St. Maarten Medical Center for dialysis and to various therapy clinics.”
The Foundation later hired two drivers and appointed James as its coordinator and Henk Essed as President. Over the years other persons played a role as board members, including John Hodge, Hilda Gullin-Bell, Felicia Thomas-James, Josianne Artsen, Charles Maccow and Elvia Guy.
When the St. Maarten Development Foundation (SMDF) was established, it became the funding agent for Helping Hands Foundation. Helping Hands currently has seven buses, four of which were donated by SMDF recently, for which the foundation is “truly grateful.”
Other activities and projects introduced over the years included a heritage calendar, a weekly senior gathering named the “Activity Group,” a Backyard Gardening Project and excursions organised regularly for seniors.
“Over the years we realised that after persons go on pension, there is a need for recreational activities that cater to the retirees. Seniors tend to become lonely after pension age and need to be able to socialise and still be productive. Besides that, seniors can encourage each other to remain active and give back to the community,” James said.
The goals of the foundation are to continue to expand its services and to involve youths to volunteer to assist the elderly.
The current board includes President Antonio Delano Rogers, Vice-President Josianne Artsen, Secretary Patricia Friday-Bell, Assistant Secretary Felicia Thomas-James, Treasurer John Hodge, Assistant Treasurer Hilda Bell-Gullin, board members Charles Maccow and Monica Salome-Simeon.
Helping Hands Foundation thanked all of its donors for their support and contributions over the years, which have made it possible for the foundation to continue to function.
Seniors willing to be part of the Helping Hands Foundation or those who are in need of its services and would like to socialise can contact the foundation at Van Buren Drive #1, in Cole Bay, tel. 544-5866 or 524-1712, or by e-mail at
helpinghandsfoundationh@gmail.com . Its website is
www.sxmhelpinghandsfoundation.org .