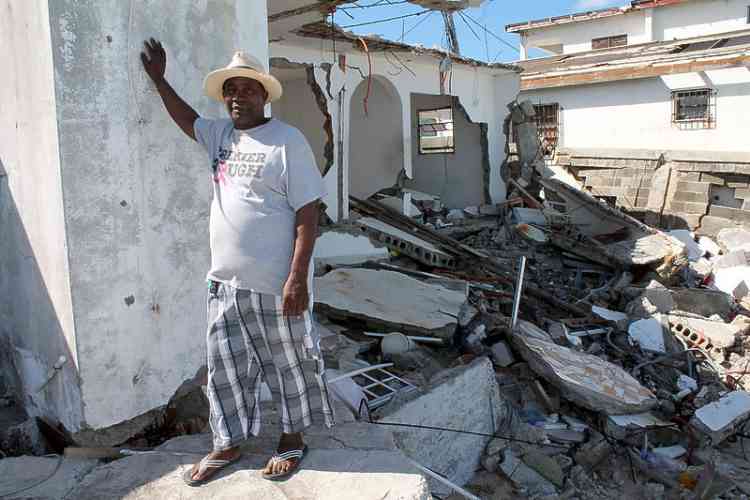 MARIGOT–Six months have passed since Hurricane Irma devastated the island and Sandy Ground resident Henry Diamond is in despair; still homeless, unemployed, and seemingly forgotten by authorities. He may not be the only one.

His two-bedroom ground-floor house at 86 Rue Lady Fish, right on the water, is a pile of concrete rubble, a now-calm ocean lapping at various detritus. Objects that do not even belong to him swept in on the waves, a stove for example, are still there.

No walls remain on the water side because a huge steel-hulled yacht carried by the storm surge smashed into the house. He was not insured.

That yacht, not yet salvaged, ended up embedded between two adjacent houses. The owner of one of the houses was in Guadeloupe during the hurricane.

Diamond, a taxi driver and part-time music teacher, and his wife, a maid, had the good sense to move inland in Sandy Ground to another house to shelter from the storm. But that house also lost its roof. They both survived, however. Now they are living in Nina Duverly School in Marigot, but under pressure to move out.

“I need help to rebuild, and I’m missing 10 doors and 14 louvres, as well,” he said dejectedly, surveying the damage of what is left of his house. “We’re living in the school, but sometimes I sleep here too. They [the school – Ed.] say we must leave because they need the place. But I have nothing. Everything is gone.

“I want to know why I am still in this situation. I’m hearing the Collectivité received 46 million euros and it is getting more financial help from all over, France, Guadeloupe, Martinique, Europe, etc. That’s not a small amount of money. But nothing is happening for me and many other people. Why, six months after the hurricane no one is looking after us or saying anything to us. You cannot tell me after six months nothing can be done.”

Not only did Diamond lose his house, he lost many musical instruments, piano and drum set among them. He says they were valued at around US$15,000 and are now useless.
He has managed with the help of neighbours to buy a refrigerator and a freezer, but they remain in their boxes as the house, without rooms and a kitchen, basically needs to be reconstructed. He said he did receive the State’s Cohésia debit card, but that was only good enough to buy food.

“There are people receiving this book of coupons which are valued at 70 euros each, but I didn’t receive that, and I am the one that needs it most,” he insists. “Some people are receiving those coupons and they don’t need it. Something is wrong.”

One wonders whether Diamond’s situation can even be resolved before hurricane season starts again. He said there are “thousands” in situations similar to his. The Irma experience confirmed the coastline from Sandy Ground to Baie Nettle is a high-risk zone. That means Diamond’s wish to rebuild is subject to restrictions under the new rules, if allowed at all. President Daniel Gibbs has implemented a two-year delay to review building permits.

“I have been to the Collectivité for help, but they are blaming insurance companies for the delays. I don’t know, but the government must do something for the people. At the school we don’t get food or water, so we can’t live there anymore. If I can get windows and doors put on, at least I could live here in the meantime.”

Second Vice-President of the Collectivité Yawo Nyuiadzi could not be reached Sunday for comment on Diamond’s situation. Nyuiadzi is the President of Semsamar, which constructs and manages social housing. Sources say the social housing situation was already bad before Irma because of waiting lists and now it is worse.