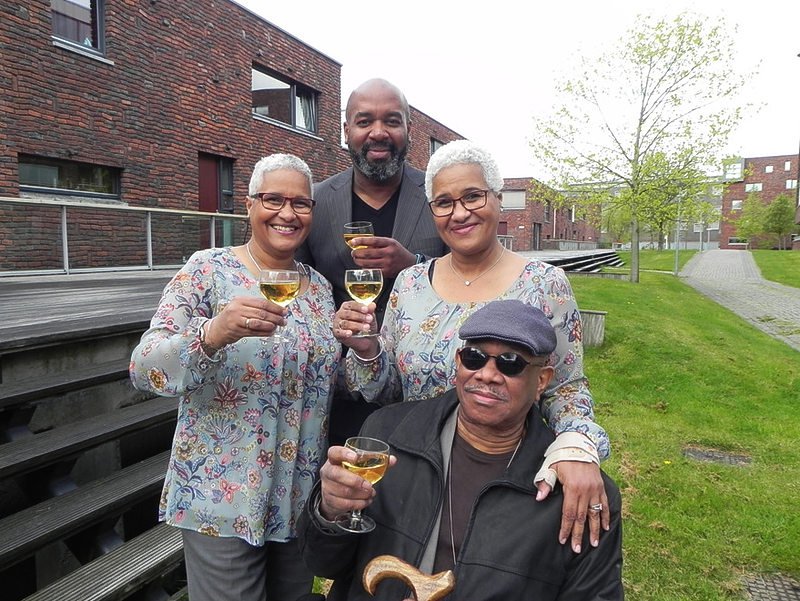 GOUDA–When Mireya Ostiana-Wijman and Henry “Boy” Ostiana moved to the Netherlands last year in search of medical care, Mireya knew that besides helping her husband who suffers from vascular dementia she wanted to do something for Alzheimer’s patients in St. Maarten.

“We want to turn our experiences with this disease and the care that we are receiving into something positive, an effort that Alzheimer’s and dementia patients in St. Maarten can also benefit from,” said Ostiana-Wijman in an interview with The Daily Herald.

Determined to achieve her goal, Ostiana-Wijman started preparations to set up the Henry Ostiana Foundation. The foundation was officially established at a notary in Utrecht on April 28 and announced one day later during her husband’s 70th birthday at their new home in Gouda.

The objective of the Henry Ostiana Foundation is to organise events to realise suitable day care facilities for Alzheimer’s patients in St. Maarten, to provide training for caretakers and to raise the awareness on the island about this disease which has several phases, all of which have different particularities requiring a different approach and care.

Ostiana-Wijman has already been in contact with the St. Maarten Alzheimer’s Foundation and the worldwide organisation Alzheimer’s Disease International. Representatives of the Henry Ostiana Foundation want to travel to St. Maarten late this summer to meet with government officials and stakeholders, such as the White and Yellow Cross.

On September 21, a first benefit evening will be organised in Gouda. This event will serve as a kick-off for a series of activities to raise funds for St. Maarten. The Henry Ostiana Foundation currently has three board members and a fourth person will be added shortly.

The Henry Ostiana Foundation has started the process to acquire the so-called ANBI status as a charity organisation which makes donations tax deductible under Dutch law. A website is being built of which the domain name has already been registered.

Specific care for Alzheimer’s/dementia patients is direly needed in St. Maarten. “We came to the Netherlands in April 2016 because of Henry’s disease. We were able to make that move because we have family and a support system here. But not all dementia patients and their families are able to take that step. That is why we need to create more facilities for those patients who remain in St. Maarten,” she said.

Ostiana, who used to be the Director of the Windward Islands Rehabilitation Department (“Reclassering”) and who is one of the founders of the St. Maarten Voluntary Corps (VKS), suffered a cerebral infarct in August 2011 at the age of 64. In 2013, he was diagnosed with vascular dementia. The decision to move to the Netherlands was a necessary, but difficult step.

With the many facilities offered in the Netherlands it proved the right decision with Ostiana’s deteriorating situation. He has a wheelchair, talking has become more difficult, his motility is not good and now he also has epilepsy. Ostiana attends a day care facility specialised in Alzheimer’s and dementia and assistance at home is provided.

“This form of day care should also be offered in St. Maarten. It would be of enormous help not only to the patients but to their families as well,” said Ostiana-Wijman, a former employee of the St. Maarten Council of Advice who has also been active in the island’s politics in the past.

In the commercial, Ostiana explains that it is hard for him to explain his thoughts to people. “Sometimes people try to help you, but some people have no patience. Sometimes people don’t respond positively, sometimes they do like my neighbour who offers to help me with my shoelaces,” he says in the one-minute commercial. Ostiana will also feature in the upcoming quarterly magazine of the Netherlands Alzheimer’s Foundation.

On April 25, Ostiana-Wijman was a guest on the popular morning TV show “Coffee Time” (“Koffietijd”) on RTL4 where she had the opportunity to tell her story and what it meant to be a full-time volunteer care giver of a dementia patient. Also raised during the programme was the subject of cooking. “That is a special subject for us because Henry loved to cook before his illness. He always cooked for his family and even prepared my office lunch.”