Home Local News Heritage after Irma debate in The Hague 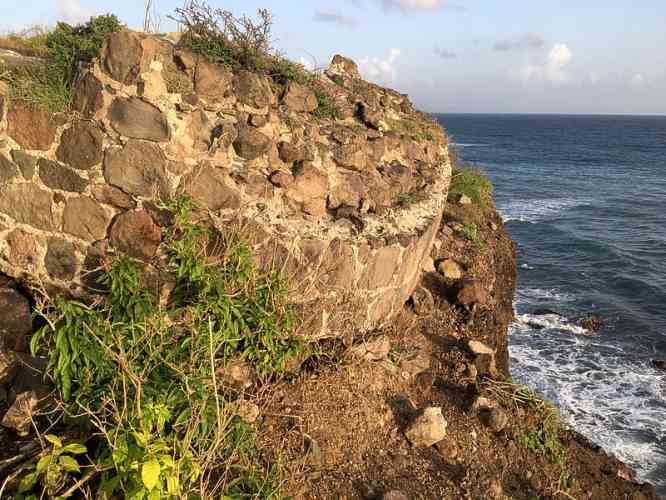 Remains of Fort Nassau, one of St. Eustatius’ oldest batteries, are on the verge of falling off the cliff.

THE HAGUE–The “Heritage After Irma” debate was organised last week in The Hague to share experiences and lessons learned during and after Hurricanes Irma and Maria, and to discuss ways to better protect heritage against the increasing intensity and frequency of hurricanes.

St. Eustatius was represented by Monuments Director Walter Hellebrand, who highlighted the increasing danger that erosion on the island poses to built-up heritage.

The meeting was organised by the Netherlands Commission of United Nations Educational, Scientific and Cultural Organisation UNESCO in cooperation with Leiden University’s Nexus programme.

Professionals working in the field of heritage preservation and archaeology and at museums and archives, as well as researchers and teachers from universities and civil servants from relevant Ministries and departments were invited to the discussion.

The topic seemed to be very much on the mind of these groups and turnout was beyond expectation, Hellebrand said.

He said that presentations were given by Director of St. Maarten Archaeological Center SIMARC Jay Haviser and Director of the National Archives of Suriname Rita Tijen Fooh, in her capacity as president of the Caribbean branch of the International Council of Archives CARBICA.

Haviser described how SIMARC was destroyed by Irma – with Maria damaging what was left of the contents through the rains she brought. He emphasised, according to Hellebrand, that in concentrating on the future, it is important to focus on the heritage that escaped the destruction rather than on what has been lost.

He also said that St. Maarten’s Government does not seem to grasp the importance of the concept of “shared heritage,” where historical structures illustrate the history of one community in relationship to another – as does, for example, Fort Amsterdam.

Tijen Fooh issued an urgent call to action to all Governments in the Caribbean to not only make archival depository facilities hurricane proof but to also have well-rehearsed and communicated disaster plans in place. “We have to act now,” she urged.

During the debate that followed, Hellebrand explained that there was a lot of mention made of the need for cross-border Caribbean cooperation.

The question whether the islands’ inhabitants have pride in their heritage also came up. Hellebrand was happy to give two very recent examples of local pride in Statia’s heritage.

A concerned citizen consulted him about the legality of setting up containers as permanent structures within the Urban Conservation Area of Oranjestad.

Hellebrand said, however, that the Island Government “unfortunately” never responded to messages about the matter.

Another concerned Statian flagged the risk of Concordia battery falling off the cliff because of ongoing erosion.