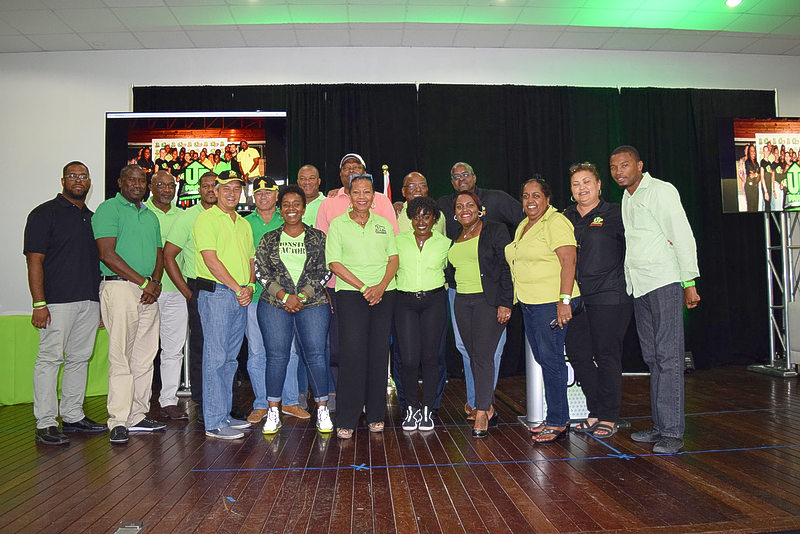 By loud acclamation Heyliger was reaffirmed as the leader of the United People’s (UP) party with MP Franklin Meyers as deputy at party’s congress held Saturday evening in Belair Community Centre. The congress was held in accordance with the party’s constitution that called for such a gathering every two years.

Heyliger said he has been accused of lack of leadership, but upon examination of those who have made this cry it is clear “they are the ones that did not get what they wanted.”
“My record is unmatchable and yet I am called weak. Under by record, tourism numbers were at an all-time high. Government companies that were once failing were then making all-time profits and investments. Our people were working and celebrating life. We were a happy people,” Heyliger said.

Pointing out former UP, now independent MP Maurice Lake, Heyliger said, “Back-to-Basics wanted the basics for our people. I say no way. Our people should not settle for back to basics; they should get the best of everything. The best port, not a basic port, the best airport, not a basic airport, the best road, best health care, the best education. So in the UP vocabulary, nothing basic exists.”

Heyliger said he gave up the fight to become prime minister when UP formed the governing coalition in 2014 “to save St. Maarten from the turbulence that the Dutch Government was putting the island through. I sacrificed as I did not want this island to suffer. I did not want to see the pain that my grandfather suffered and died for happen again rather we tried the diplomatic way, but that has failed.”

Meyers, after his declaration as deputy lead for a second time, told the congress he and Heyliger can do much more in the Council of Ministers, but had opted two years ago to take up with seats in Parliament to avoid instability, but due to others personal wants, the government did not last. To those who broke the government, he said: “Now they are in government and they should deliver.”

Eying the upcoming elections, Meyers said, “I don’t mind a hard battle, because the sweeter the victory.” Using the old adage about when Jesus is on board a ship it can face any storm, he said, “Tell NA, tell DP to bring the storm, because Jesus is on board!”
The congress also saw former MP Sylvia Meyers-Olivacce voted back in as Party Board President. She was opposed by former board member Stuart Johnson. The other five members of the party board – Gina Illidge, Solange Apon, Earl Wyatt, Tatiana Arrindell and Kenneth Serrant were reelected to their posts. They are joined by former Democratic Party (DP) candidate Armand Meda.

Meyers-Olivacce, in her victory speech, said the party board and its leadership “will continue to work in the benefit of the people of St. Maarten … UP is the only party that can see you though [these times –Ed.]” She asked those gathered if they were truly happy with situation the country is in now and if they were better off under the current National Alliance (NA)-led coalition. She said UP “will carry the burden to get the country back on track … we need to take our destiny in our own hands.”

She made it clear while she has no intention to run as the candidate in the upcoming elections, “but if I am forced to, I will work with you and for you.”

Congress Master of Ceremonies former MP Jules James called on all UP members and supporters to encourage everyone to go out and vote, because the September 26 parliamentary elections are of paramount importance. He said of Heyliger: “Our leader dreams things and asks why not while other leaders ‘ask how come?’”

Also present at the congress, but not signed up as members were independent MPs Leona Marlin-Romeo and Cornelius de Weever. Both MPs form part of the opposition bloc, referred to as the “Super Seven” together with UP.
Source: Daily Herald
Heyliger calls on people ‘to take country back’