Home Headlines & Top Stories Heyliger to remain behind bars for another eight days | THE DAILY... 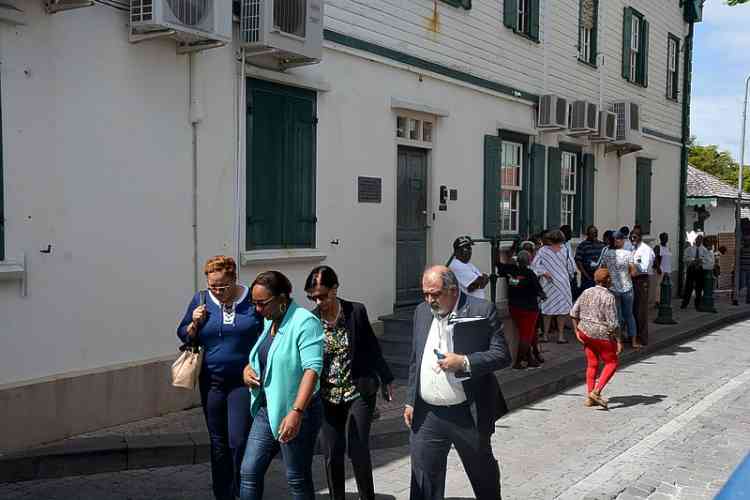 President of Parliament Sarah Wescot-Williams and MP Sidharth Bijlani among some of Heyliger’s family members and supporters at the Philipsburg Courthouse on Thursday.

PHILIPSBURG–The Judge of Instruction agreed with the Prosecutor’s Office’s request to continue arrested Member of Parliament (MP) Theodore Heyliger’s detention on Thursday for eight more days. Heyliger (48) had been arrested Tuesday in connection with the “Larimar” investigation and his house was also searched.

A handful of supporters gathered at the Courthouse on Thursday afternoon to find out whether the judge would extend Heyliger’s detention.

Several persons were arrested and several premises were searched as part of the Larimar investigation into corruption, money-laundering and the acceptance and paying-out of bribes in the construction sector in St. Maarten.

One of these persons under investigation is Dutch consultant R.M. (64), who is suspected of alleged bribery of former Minister of Public Housing, Spatial Planning, Environment and Infrastructure VROMI and now United Democrats (UD) MP Heyliger between August 1 and September 9, 2011.

According to an indictment that was handed to R.M. by the Prosecutor’s Office late last year, he allegedly paid Heyliger US $300,000 for the purchase of real estate – $260,000 via Caribbean Advice and Consultancy Ltd. and $40,000 through Advanced Consultech SA – to persuade him to award government contracts to dredging company Devcon TCI Ltd. and construction company Volker Construction International BV/Volker Stevin Caribbean NV.

These crimes were allegedly committed in St. Maarten, the former Netherlands Antilles, the Netherlands, Anguilla, the Isle of Man, Panama, and St. Kitts and Nevis, the indictment stated.

Other suspects R.E. and Heyliger’s family member G.P. were also arrested recently in connection with this case.