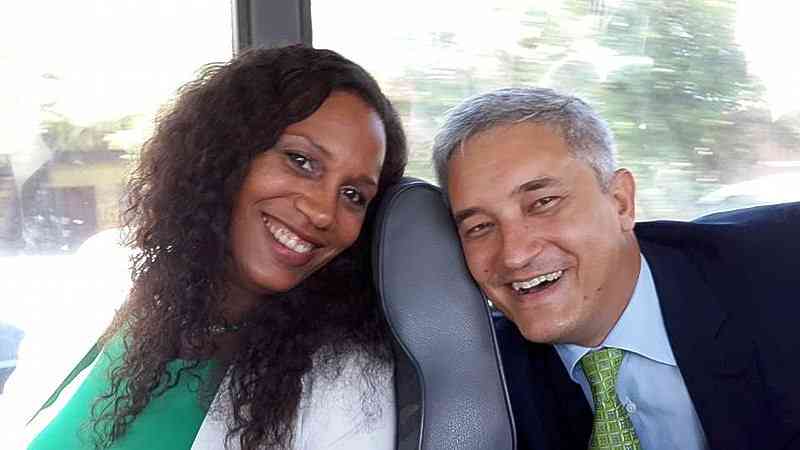 WILLEMSTAD/PHILIPSBURG–Suspended Member of Parliament (MP) Theodore Heyliger and his wife Grisha Heyliger-Marten flew to Curaçao on Tuesday night to attend an interview at the United States Consulate in an attempt to obtain a medical visa. Heyliger requires a visa because his Electronic System for Travel Authorization (ESTA) was cancelled after the Prosecutor’s Office confiscated his passport when he was in pre-trial detention in February.

The medical visa was granted to Heyliger by US authorities. However, to their surprise, a new hurdle has appeared. Heyliger’s passport is listed in the International Police Organisation Interpol database as “stolen.”

The Prosecutor’s Office held Heyliger’s passport from February 19 to June 17, and his diplomatic passport was surrendered in late May when the verdict for his release was issued on the condition that he surrender his passports.

Heyliger’s regular passport was returned to him on Monday. He now has to now apply for a new passport, a process that could take up to four weeks.

When contacted on Wednesday evening, the Prosecutor’s Office told The Daily Herald it had no comment.

Countries submit records of lost or stolen travel documents to the database.

“Only the country which issued a document can add it to the database, and it can be done by the INTERPOL National Central Bureau or other authorized law enforcement agencies,” Interpol explains.

“Law enforcement officials at National Central Bureaus and frontline locations – such as airports and border crossings – can check the passports of individuals travelling internationally against the SLTD. In this way they can immediately determine if the document has been reported as lost or stolen so they can take the necessary actions.”

A very irate and frustrated Heyliger-Marten said on Wednesday that there is no guarantee this path is also not boobytrapped to further stifle her husband’s effort to get medical treatment. When and if a new Dutch passport is received, it has to be sent by FedEx back to Curaçao for the visa to be affixed. Only after that process is fulfilled can Heyliger attempt to see a specialist in Boston, Massachusetts.

She said her fear of losing her husband to the cancer growing inside him looms larger with each passing day. “This is my husband, the father of my children. He is a human being. He has harmed no one and has only given his all to the community. This is torture for him, for me, for our family,” she said.

She questioned who, if not the Prosecutor’s Office and the prosecutor on the case, had reported the passport as stolen.

“This is pure wickedness, and evil. They only know what they have put together to destroy my husband. They don’t think of him as a person, just as a career-maker for them. They have proved they will do everything and anything, even destroy him from his insides, to get a feather in their cap. Now that is corrupt!

“It’s extremely hard for me to believe that the Dutch have nothing to do with Theo’s ESTA being revoked. And how crazy and outrageous is it that he could travel on this so-called stolen passport from St. Maarten to Curaçao and back. This is even weirder than a bad science fiction story.

“I also want to directly tell the Prosecutor’s Office that I don’t care how much it denies it … [but – Ed.] I, Grisha Heyliger-Marten, believe it’s all the Prosecutor’s Office’s doing. He wanted to make sure Theo doesn’t run away, so he took it to this extreme. Why would he run away? Unlike the prosecutors who come here and live off the people of this country, this is Theo’s home.

“He has given much of his life to this island and now he is fighting for his health because of pure maliciousness. The vindictiveness of the Prosecutor’s Office must stop. The goal should not be to continue to try and kill my husband slowing and painfully,” said Heyliger-Marten.

The Heyligers plan to wait for the new passport.