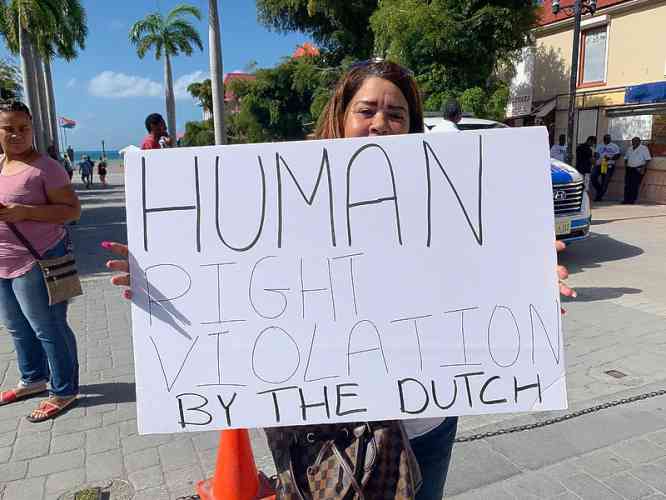 A Heyliger supporter holding up a sign during the MP’s hearing last week Friday.

PHILIPSBURG–Detained Member of Parliament (MP) Theodore Heyliger’s attorney Eldon “Peppie” Sulvaran filed a petition with the Court of First Instance on Monday citing that the transfer of his client last week was unacceptable and requesting that the court order Heyliger’s return to St. Maarten immediately.

The lawyer could not travel to Bonaire where his client is being detained because flights to the BES islands Bonaire, Aruba and Curaçao are fully booked due to Carnival festivities. The lawyer also stated in his petition that neither he nor Heyliger’s family had been informed about the transfer.

The United Democrats (UD) leader was ordered to remain another eight days in prison in connection with the ongoing Larimar case. The prosecutor said in a statement Friday that Heyliger would undergo his pre-trial detention in the Judicial Institution Caribbean Netherlands (JICN) in Bonaire. This decision was made based on the fact that the Pointe Blanche prison has reached its maximum capacity of 70 and continuing to detain Heyliger at the Philipsburg police headquarters was not an option.

The Prosecutor’s Office expects the capacity issues at Pointe Blanche to deteriorate further in the coming weeks, as Curaçao has announced it will be sending seven prisoners back to St. Maarten.

Heyliger was arrested by the Anti-Corruption Task Force TBO on February 19. The Prosecutor’s Office is holding him responsible for accepting bribes of US $300,000 in 2011 when he was a minister.