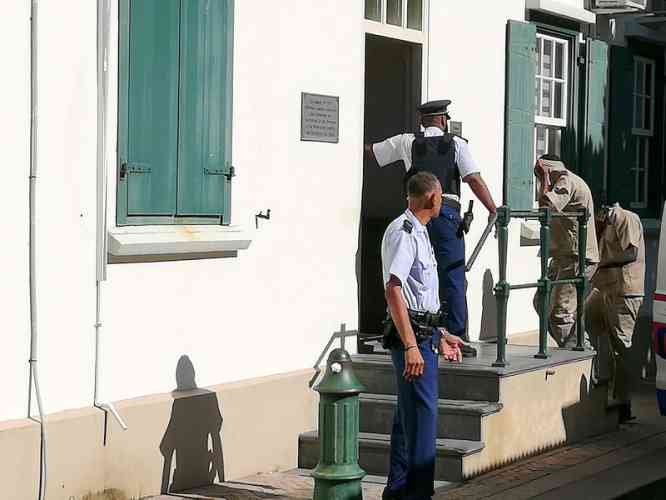 PHILIPSBURG–The Joint Court of Justice handed out prison sentences of seventeen and fourteen years on Friday for two men found guilty of involvement in a large number of armed robberies in 2016.

Orlando Tovian Grey and his co-defendant Kendy Pierre had both appealed the sentences meted out by the Court of First Instance. On June 8, 2017, the Judge in the lesser court had sentenced Grey to 12 years and Pierre to nine years.

During the hearing of the appeals, which took place on March 15, the Solicitor General had called for prison sentences of 15 and 12 years respectively.

Both defendants denied the charges and claimed they were being held in detention for something they did not do.

The Court of Appeals found Grey and Pierre guilty of having committed no fewer than 11 armed robberies during evening hours “in the relatively short period from July 27, 2016, up until and including October 18, 2016,” the Court stated.

In eight of the 11 cases it concerned Chinese restaurants or supermarkets, but a gas station and a Subway outlet also were victims in this spate of armed robberies committed by two persons following the same modus operandi, according to the Court.

Armed robbery carries a maximum prison sentence of 20 years. In imposing the sentences for Grey and Pierre, the Court took into consideration that they had threatened their victims with two firearms and that in four robberies they had also exerted violence by hitting their victims with a firearm or by pushing the weapon in their faces.

“The apparent ease with which the suspects set out and committed the robberies one after the other – sometimes with only a few days in between – gives cause for concern and fear of repetition, all the more since during trial the suspects have failed to show any insight as to the reprehensibility of their behaviour,” the Appeals Court stated in the verdict.

“These shocking facts have not only frightened and duped the victims, but have also caused quite a stir in the relatively small St. Maarten community in general and among Chinese entrepreneurs in particular.”

The severe punishments did not sit very well with the suspects and their lawyers. “This is the most worthless verdict I have received in 12 years,” Pierre’s lawyer Geert Hatzmann said in response.

On behalf of his client, Hatzmann immediately filed for a final appeal (“cassation”) with the High Court in The Hague.

It is expected that co-defendant Grey, who was represented in these proceedings by attorney-at-law Shaira Bommel, will do the same. Grey has two weeks to file his final appeal.