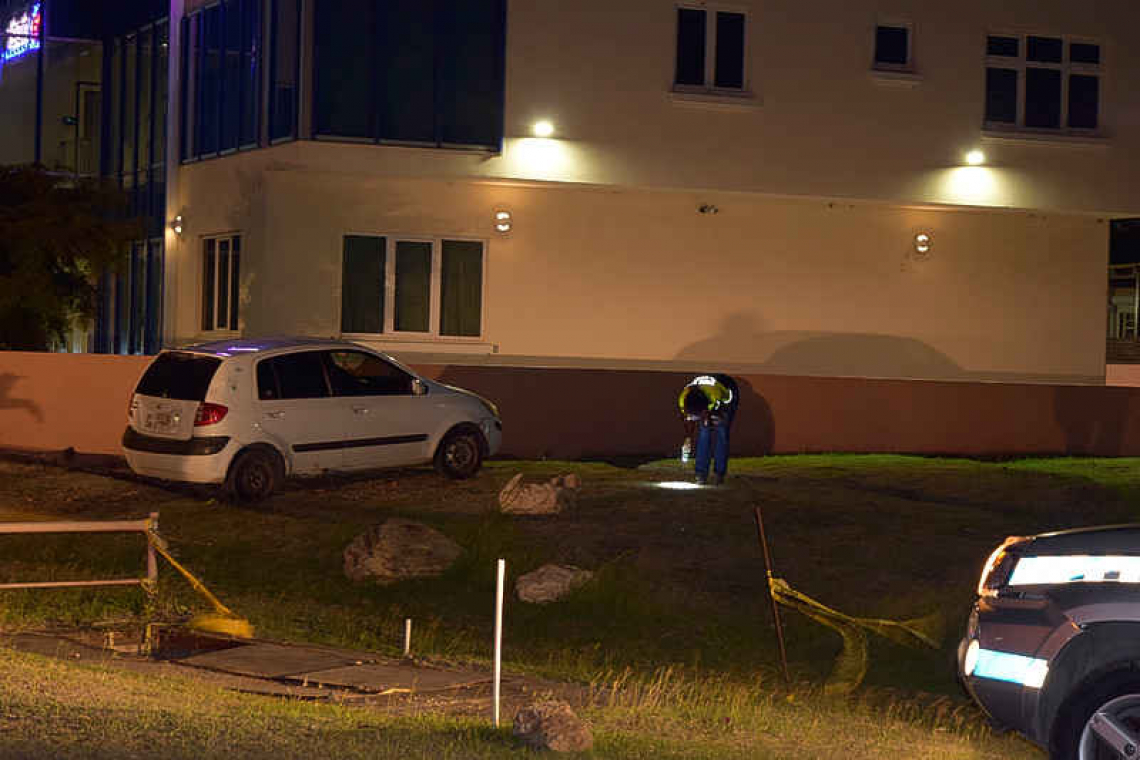 CAY HILL–A group of three men suspected of robbing three supermarkets led police on a high-speed chase that ended with one of them being shot and his accomplices being arrested near the Antek building in Cay Hill shortly before 9:00pm Friday.

The men robbed a supermarket on Union Road around 8:35pm and fled the scene in a white Hyundai Getz. A police patrol spotted the vehicle about 10 minutes later in the Cay Hill area.

When the officers ordered them to stop, the driver bolted and led police on a high-speed chase. The officers followed the suspects down Link One toward the One Tete Lokay roundabout.

The suspect vehicle went around the roundabout, jumped the curb violently and ended up on the grassy strip next to the Antek building, a bystander told The Daily Herald on Friday night.

The car stopped, the doors opened, and the suspects got out to continue the chase on foot. One of the suspects had something in his hand that looked like a weapon, the bystander said.

The officers fired at least six shots at the robbers. One man was hit, but he still managed to run behind the Antek building. He was later found, bleeding and in pain, on the ground behind Emerald Funeral Home.

He was taken to the nearby St. Maarten Medical Center (SMMC), where police officials say he is in critical but stable condition.

Police arrested the other two robbers shortly afterwards, and they were taken to the Philipsburg police station for questioning.

Police quickly cordoned off the area around the getaway to begin its forensic investigation. This newspaper understands that multiple weapons have been confiscated.

A section of Welgelegen Road was blocked off from 9:00 to 11:00pm Friday while the investigation took place, leaving some residents of Kudu Drive without access to their homes.

The three men are also suspected of having robbed two Chinese supermarkets in Concordia between 7:00 and 8:00pm Friday. Gendarmerie Commandant Stephan Basso confirmed late Friday night that his department is collaborating with the St. Maarten Police Force KPSM with the investigation.

A police vehicle blocking access to the crime scene.