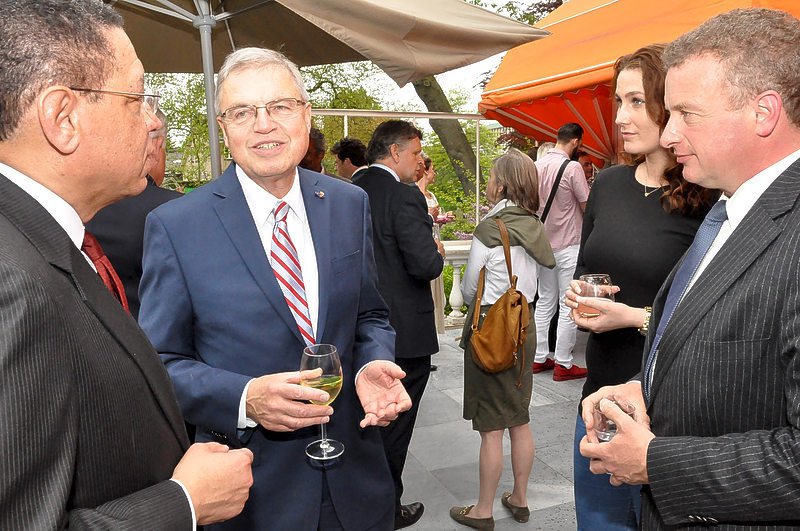 LEIDSCHENDAM–Former Dutch Minister of Antillean and Aruban Affairs for the Christian Democratic Party CDA Professor Ernst Hirsch Ballin made a case on Tuesday for the introduction of a Kingdom Parliament in which the Dutch Caribbean countries are duly represented, as well as a Dispute Regulation (“geschillenregeling”). “Having neither of the two is no longer defendable,” he said.

Hirsch Ballin was the main speaker at the first George Maduro lecture in Leidschendam, near The Hague, on Tuesday. A lecture in honour of the Curaçao-born resistance hero who as a reserve lieutenant in the Dutch cavalry fought against Nazi Germany and who successfully raided a villa where German parachutists were hiding on May 10, 1940, at the start of World War II (WWII), the exact same day and location where Tuesday’s event was held.

The reform of the constitutional relations within the Dutch Kingdom and accompanying amendment of the Charter was a necessity to speak of defining the people of the four countries with their own Parliaments within a central constellation and with one general citizenship, stated Hirsch Ballin.

“However, the 2010 amendment of the Charter is an unfinished project as long as no convincing answer can be given how the legislative and governmental authorities are constitutionally founded,” said Hirsch Ballin, who was Minister of Antillean and Aruban Affairs and of Justice from 1989 to 1994 and currently is a professor at Tilburg University and University of Amsterdam.

A possible answer to that is that the Kingdom as such should have a democratic government. That can only happen if there is also a Kingdom Parliament that is elected in the same manner as in the federal states system.

This could be done possibly in a simpler format of an addition to the Dutch Parliament of elected people’s representatives of the other countries of the Kingdom for the handling of legislation and policy regarding Kingdom Affairs.

Under the current format, where final decisions are taken by the Dutch Parliament which has not been co-elected by the people of Aruba, Curaçao and St. Maarten, there should be an independent body that handles constitutional disputes to which the Dutch Caribbean countries can turn.

Article 12a of the Charter states that there should be such an entity, a Dispute Regulation, but so far this has not been arranged through a Kingdom Law. According to Hirsch Ballin, the democratic legitimisation of Kingdom legislation does not exclude the constitutional Dispute Regulation. But, he added, “Not doing any of them can no longer be defended.”

Hirsch Ballin also addressed the Dutch citizenship enjoyed by those living in the Kingdom. He asked what was more important: the one, joint citizenship or the plurality of the people. But why should one be refuted by the other, he added.

A statement that there was only one Dutch people, spread over four countries, would not only be strange, but would also go against the choice of the individual countries to have their own Parliaments, said Hirsch Ballin.

He said the possibilities to restrict migration from the Dutch Caribbean to the Netherlands, as has been suggested in an initiative law proposal of Member of the Second Chamber of the Dutch Parliament André Bosman of the ruling liberal democratic VVD party, are “very limited,” especially now that all Dutch citizens are also citizens of the European Union.

Besides, he said, such regulations would impede the undivided citizenship as constitutional foundation of the Kingdom. He said that luckily the proposal to introduce various colours of Dutch citizens depending on the country where they lived, an idea which he called “legally unattainable and downright shameful,” was short-lived.

Hirsch Ballin concluded with satisfaction that the constitutional right through a single Dutch citizenship for the people of four countries has created an open, modern citizenship, “a transnational citizenship,” that offers people the opportunity to live in different parts of the Kingdom without having to sever the ties of their networks.

He called it “disappointing” that the Dutch Caribbean countries still held on to the residency permit system “from colonial times” which created a distinction based on the country of origin of a person with the Dutch nationality.

At the same time, he called it “particular” that Dutch residents living abroad could vote for the Second Chamber, but that the people of Aruba, Curaçao and St. Maarten were exempted from this voting right, with the exception of those persons who have lived for 10 years or more in the Netherlands.

He warned that the “nationality feelings” were being “politically articulated” in an increasing manner. He said the highlighting of the legal and social-economic differences between Dutch citizens from Aruba, Curaçao, St. Maarten and the Netherlands could further undermine the experience of togetherness. “It is evident that this is exactly the intention of some politicians on both sides of the ocean,” he said.

According to Hirsch Ballin, it is also evident that the reality of many people points in another direction: there is an increasing need for a legal connection of the confidence that people derive from their citizenship with the flexibility of a life in different contexts.

“The Dutch Kingdom offers a constitutional framework for this with a future value: one central constellation with safeguarding tasks for defence, foreign relations, fundamental rights and democracy which offers room for a diversity of open national identities that may overlap each other,” he said.

Hirsch Ballin, who had a Jewish father who fled at the start of WWII from Germany to Amsterdam where he joined the resistance, dedicated ample attention to the war hero George Maduro, the Sephardic Jewish Antillean Dutchman who was only 24 when he and his brave small group attacked and recaptured Villa Leeuwenbergh in Leidschendam.

Maduro died at the age of 28 in the concentration camp Dachau, but in his short life he left an “unforgettable impression.” From an Antillean point of view he was and still is a “Yu di Korsou” (a child of Curaçao) who, like many other Antilleans, made an often-forgotten contribution to the allied battle against Nazi Germany, said Hirsch Ballin.

“George Maduro went against the military violence with a hero’s courage. He sought, again with great personal courage, a way out of the occupied Netherlands and even in the concentration camp he manifested himself as a person who could not simply be suppressed. Can we also learn something from the mental power of a person like him, a person who didn’t allow himself to be reduced to a copy of a sort that was hated by the other?”

The first George Maduro lecture, organised to commemorate his 100th birthday, was a combined initiative of the Kingdom Relations Committee and Madurodam, the miniature city in The Hague that was named after the resistance hero.