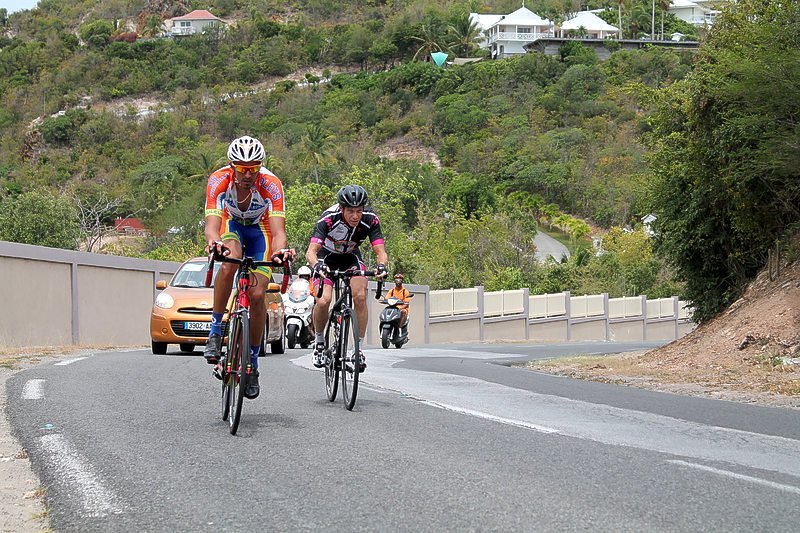 MARIGOT—VCG’s Dean Hodge Jr won the Grand Prix du CCTSM in Grand case on Sunday but it was a bitter sweet victory and probably not a race he will be most proud of.

Intense rivalries can sometimes bring out irrational reactions which one usually regrets; we’ve seen it before on TV many times with the pros.
Hodge was fined 35 euros for unsportsmanlike behaviour after knocking away the water bottle that was being handed to Mark Maidwell by a road side helper.  It was deemed intentional by the cycling committee on the evidence of witnesses.
Losing one’s cool is not unusual and just a part of racing. The slight blemish on Hodge’s wholesome, super-cyclist image however is not likely to cause any upheaval but the complaint from Maidwell added some spice to Sunday’s race.
Hodge and Mo Trouble’s Mark Maidwell had been locked in a head-to-head duel with a gap of about a minute ahead of the 18-strong pack for almost the entire 86K race, before Hodge crossed the finish line in Grand Case first in 2: 23: 56 despite stopping to adjust his derailleur in Baie Nettle.  Mark Maidwell, who also won the Master’s category, was second (2:24:00) and JCO’s Gregoire Pigeon, third, in 2:24:05.
Emmanuel Carbon (ASM) was fourth and Mo Trouble’s Dick Luttekes, showing little sign of discomfort from cracked ribs following a mountain bike fall coasted in for fifth place.
“We were all a happy family working together until Dean did a ferocious attack but I managed to get on to his wheel while Gregoire Pigeon got dropped but caught up again later,” said Maidwell, who made one of the first attacks on a hill coming out of Orient.
Pigeon, the island’s leading triathlete, admitted he got his timing wrong for the sprint to the finish.
“It was my first cycle race for a year but I’m still happy with my ride,” he said.
The race had the peloton riding to French Quarter from the start in Grand Case, before doubling back to Marigot and Lowlands. It was then three laps from the Agrément roundabout to Lowlands and back, and then the final climb back to Grand Case and the finish.
A minute’s silence was observed before the race started for the late Steve Tayeau, one of the VCG board members and liaison person in Guadeloupe.
Results of the children’s afternoon races were not available by press time.