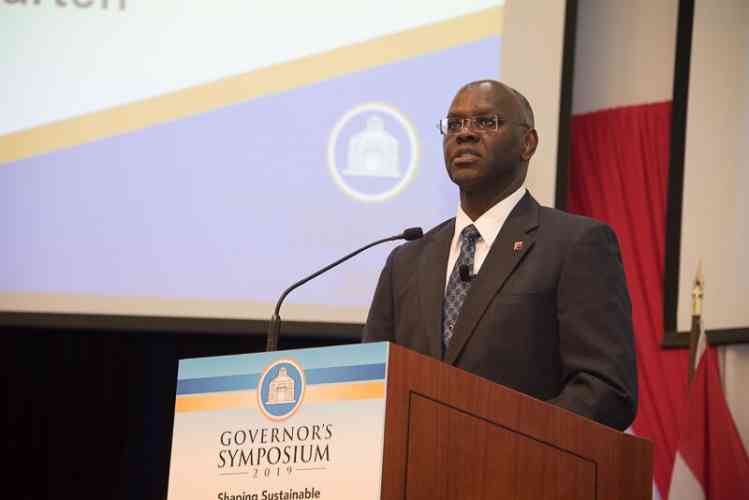 CUPECOY–If the Caribbean region does not set its sail to address the core aspect of its challenge, which is its vulnerability, the region’s fate is one of a revolving door of external shocks and recovery.

This was one of the messages from Governor Eugene Holiday at the eighth annual Governor’s Symposium held at American University of the Caribbean (AUC) School of Medicine on Friday under the theme “Shaping Sustainable Economic Recovery in the Caribbean – Challenges and Opportunities.”

Holiday said it is paramount that any policy response to external shocks must address the level of vulnerability of St. Maarten’s economy.

“In broader terms, it means that if we are to achieve the 2030 agenda of sustainable development goals we must address the vulnerability of our people, environment, infrastructure and economy. It is in this context important to underscore the special relationship between economic vulnerability, resiliency and sustainability.

“It is widely accepted that resilient countries or regions are able to ensure economic sustainability and welfare because their economies are less vulnerable and/or are able to recover from economic shocks quite quickly,” he told symposium attendees. “Our vulnerability therefore calls for special focus on resiliency strategies in the recovery agenda.

“A closer look at the challenge as a result of [Hurricane – Ed.] Irma shows that it is comprised of several dimensions: First, the rebuilding of the physical infrastructure such as the airport, hotels, utility networks, businesses and homes; second, the recovery of losses in revenue, income and jobs to pre-Irma levels and beyond; third, ensuring that rebuilding and recovery are resilient against future shocks; and fourth, the existence of the gap between investment needs and available financing.”

Holiday said that, considering the recovery efforts and plans of government, businesses and households as well as the support from the Dutch government in the form of liquidity support and the 470-million-euro World Bank-administered Recovery and Resiliency Trust Fund, it is important to recognize that St. Maarten has come a long way since the passing of Irma on September 6, 2017.

In the one year and nine months since the passing of Hurricane Irma, much of the damaged infrastructure has been rebuilt or is under reconstruction. This was funded in large part with insurance pay-outs, bank financing, depletion of private savings, drawdown of government reserves and Dutch funding.

“At the same time, there is still quite some work to be done and even more to build resiliency,” he said.

He said areas for consideration in building resilience and by no means complete are investments in airport and seaport resilience to secure the transport of goods and persons necessary for the survivability; recovery and sustainable functioning of the economy; investments in energy resilience by completing the underground cabling programme and by investing in renewable energy generation such as solar with the objective of securing an even quicker restoration of electricity in the aftermath of hurricanes; and investing in environmental protection by implementing sustainable waste management solutions.

He also suggested investments in communications resilience considering the importance of communication for disaster management and for the operation of economies in the digital age, and improving social resilience by investing in the resiliency of the population and properties in underprivileged neighbourhoods.

“It is evident that there is no quick fix to building economic resiliency. It can, however, be concluded that the challenge we face after Irma holds within it the opportunity to invest in the enhancement of our socio-economic resilience and with that the improvement of the wellbeing of our population.

“It holds within it the opportunity to set our sails and plan for sustainable recovery and development. Investing in socio-economic resilience and sustainability is also the best approach to bridging the financing gap we face as a country and a region,” he said.

Holiday said that, pre-Irma, St. Maarten’s economy generated a per capita income of US $26,163, one of the highest in the region. The underlying economic activity was in large part fuelled by more than 2.2 million cruise (1.7M) and stayover (0.5M) visitors a year. The passing of Hurricane Irma exposed and underscored local and external vulnerabilities of the island’s economic sustainability.

According to the January 2019 International Monetary Fund (IMF) country report, Hurricanes Irma and Maria caused damage and losses in St. Maarten of $2.7 billion; that is, more than 250 per cent of gross domestic product (GDP).

Damage is still visible in critical public and private infrastructure such as schools, airport, water storage facilities and several hotels.

These developments resulted in an estimated cumulated contraction in the economy of more than 13 per cent between 2017 and 2018. These losses in turn resulted in an average loss in individual annual income of $2,500, as reflected in the estimated drop in per capita income. The fiscal position deteriorated as a result of these developments, with a budget deficit of $40 million in 2017 and $50 million in 2018. And the debt-to-GDP ratio increased by almost 10 percentage points to an estimated 43.6 per cent.

“Faced with this economic reality and recognising that the next hurricane or shock can hit anytime, the community of St. Maarten has been preoccupied with the challenge of how to recover the socio-economic losses and avoid or limit future damage and losses in the event of a next hurricane or some other external shock.

“Placed in a broader historical analytic perspective, it is noteworthy that this challenge is the result of the vulnerability of our socio-economic development to external shocks over which we have no control,” Holiday said.

In the last quarter of a century the island’s economy was impacted in varying degrees by several major events:

Hurricane Luis in 1995 which led to significant damage and losses, foreign exchange earnings from tourism declined by almost $100 million (approximately 24 per cent) in 1995 and 1996 combined; the 9/11 terrorist attacks in 2001 which resulted in major losses in economic activity; the third oil crisis with a peak in oil prices at $47.30 in July 2008 and the accompanying increase in cost and loss of disposable incomes; and, most recently, the impact of Hurricane Irma in 2017 as outlined.

“Looking ahead we are faced with the threats of climate change in the form of more severe hurricanes and the risks of sea-level rise which is projected to result in Philipsburg, Simpson Bay and other low-lying areas be submerged by the sea,” he said.

“It is evident that we, all of us, government, businesses and individuals, have a joint responsibility to take steps to make our country more resilient against the impact of external shocks. The way forward will therefore require a fundamental shift in our current development model.

“The shift is the move from a primarily single-focused economic development model to a multi-facetted sustainable development model. Critical in that context is the need to recognise the intrinsic value and strength of our island’s human and natural resources as the foundation for building necessary partnerships in the interdependent global community we live in.

“I am in that regard encouraged by the efforts of government to work in cooperation with NGOs [non-governmental organisations] with support from the Netherlands and the World Bank. It is as such, in view of the imperative to build economic resilience for sustainable economic recovery, that I organised this symposium.”