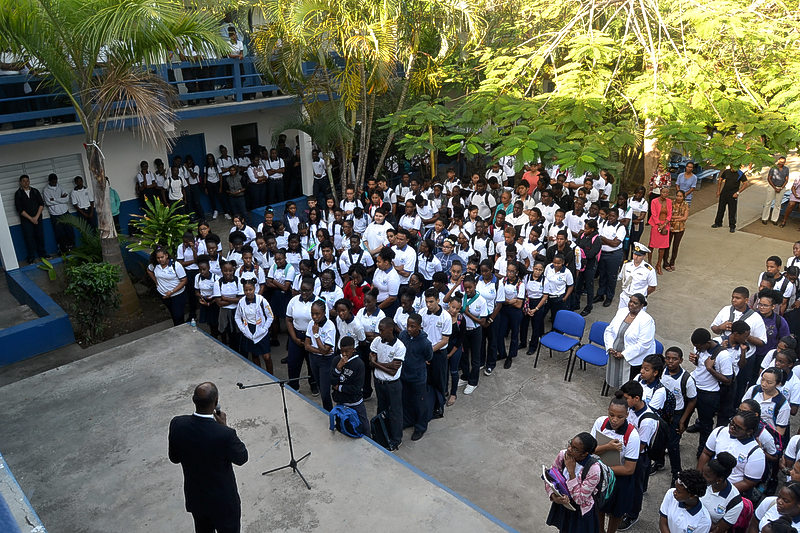 CUL DE SAC–Governor Eugene Holiday recently paid a special visit to St. Maarten Academy as part of his efforts to familiarise students on the role of civic responsibility and pride in St. Maarten.

Holiday reiterated the messages that both the parable and the poem espoused as he ensured that students were made aware that they all had talents and that they could “actualize and visualize their success.”

After the special assembly, he was escorted to the library where he met with Honour Roll students. Holiday later gave a lecture to CAPE students about civic responsibility. He shared with them several fundamental rights and freedoms, including the right to life; to live in freedom, especially freedom from inhumane and humiliating treatment; the right to privacy and a home; freedom of religion; the right to an education and of association; the right to equal treatment and to vote and freedom of expression. During the interactive session, he fielded questions from students on various aspects of the topic. He also spoke about how he was able to get selected for the job and his life experiences.

Holiday said students are the future of St. Maarten and that he “was very much impressed at their level of work and enthusiasm for learning” as was evidenced by his visits to various departments. He was also impressed by the CAPE Digital Media students on the creation of their website to reduce paper-based information and their photography skills seen in the work displayed. He was treated to a hologram in the CAPE physics class and was also able to see a “hair-raising” experiment using electricity.

The governor subsequently showed his artistic bent by producing a screen printing sample in Art class. His talk of being an excellent athlete was also put to the test as he was given the opening serve to start off the exhibition volleyball game between the national representatives for St. Maarten and a male team.

Principal Tallulah Baly-Vanterpool said St. Maarten is “blessed to have a governor who has education close to his heart… We are left feeling more enriched by his visit as he always imparts some knowledge.”