Home Headlines & Top Stories Holiday: We must find a balance between health and the economy |... 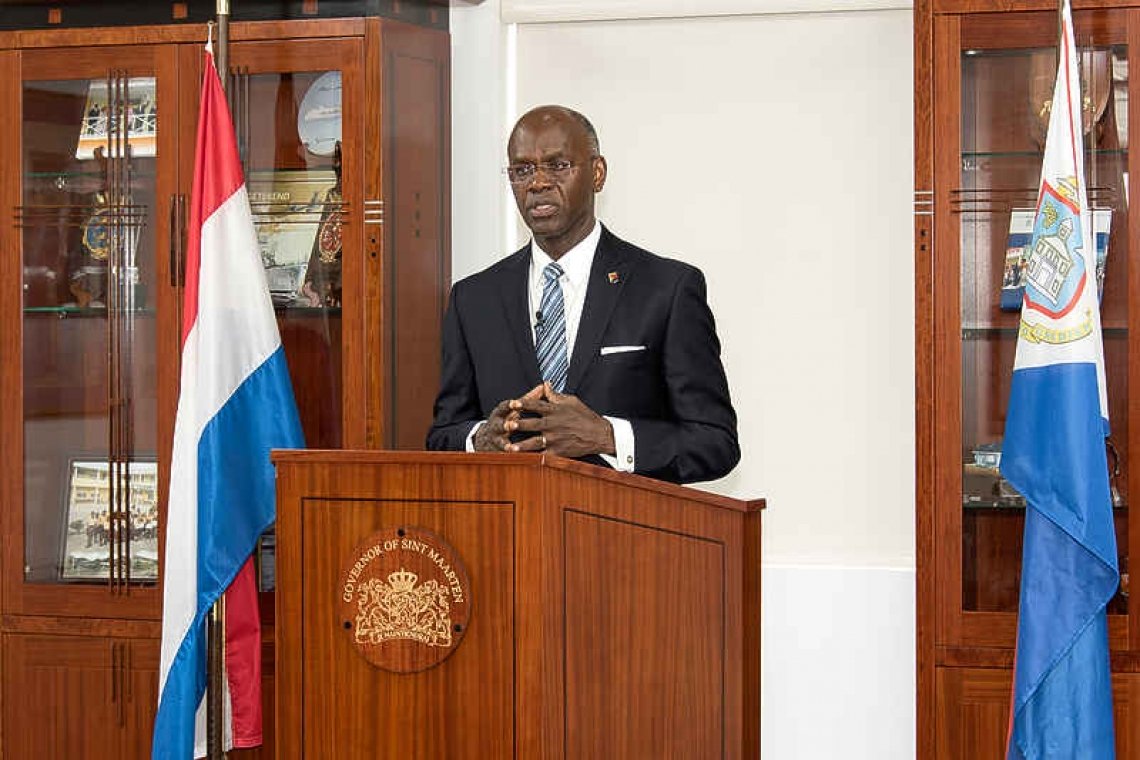 Holiday delivered a speech during the ceremony to open the Parliamentary year 2020-2021, which was held virtually for the first time due to the ongoing COVID-19 pandemic. During the opening of the parliamentary year, the governor’s speech expounds on government’s policy plans for the next 12 months.

This year, as expected, Holiday’s speech was dominated by government’s response to the crisis.

He told MPs that government’s immediate priorities are containing the current outbreak of the virus, protecting the most vulnerable, jumpstarting the economy and raising enough money to offset loss in revenue and cover budget deficits in 2020 and 2021.

While more than 500 persons have been infected and 19 have died from the disease, the crisis’ financial fallout has rocked the economy.

Unemployment is expected to be as high as 16.2 per cent. Tourism arrivals are estimated to drop by as much as 70 per cent this year while gross domestic product (GDP) is projected to decline by 25 per cent.

To reduce expenditure and increase income, government plans to introduce a public financial management reform, which will include initiatives to process tax returns digitally and improve tax compliance. Government will also seek to broaden the tax base by tapping into the digital economy, such as online shopping and Airbnb.

Considering government’s urgent need for financing, it will issue bonds to “raise the funds necessary to meet its obligations,” said Holiday. Negotiations with the Netherlands over funding to bridge government shortfalls continue to be strained over disagreements about the conditions.

Government will seek to invest in five key areas to “generate economic activity now and better prepare our critical infrastructure for when the global economy recovers,” said Holiday. These areas are digitisation, education, healthcare, transport and hospitality, and energy.

The need to digitalise has been underscored by the realities of COVID-19 because the demand to use technology in everyday life has increased, said Holiday. Government will work with telecommunications company TelEm to realise an island-wide fibre optic network.

Under the St. Maarten Trust Fund, government will implement the digital transformation project, which aims to realise a digital identity for citizens, expand online billing and payments, automate the building-permit process, and retrofit the public service centres with kiosks.

Government is prioritising school repairs funded by the Trust Fund, as well as implementing a distance-learning policy to improve “access to technology for all.”

A central element of government’s health care programme will be the construction of the new hospital and increasing the number of available specialties, Holiday told MPs.

The new hospital, scheduled to be completed in 2024, will increase the country’s in-patient bed capacity to 110 and include a 30-patient dialysis centre.

Government also seeks to upgrade the regulation and registration of medical practitioners and improve communication between care providers via a health information management system (HIMS).

The reconstruction of the airport terminal building is critical to the improvement and functioning of our transport and hospitality infrastructure, said Holiday. Government will facilitate this project, as well as the construction of the 452-room Planet Hollywood resort in Philipsburg, as a means to revitalise the economy.

Government will pursue in energy policy “anchored in solar power” and stimulate agriculture to move towards greater self-reliance and food security.

In law enforcement, government has placed completing the function books high on its agenda. It will also focus on building a new prison with the support of the United Nations Office for Project Services (UNOPS), more effective enforcement of immigration legislation and information technology systems, and introducing “more realistic licensing and fees policy based on the actual cost of justice products.”

“Government has, at the same time, considering our shared borders with the Northern side of the island, continued to work with French authorities to better coordinate island-wide judicial cooperation to combat cross-border crime,” said Holiday.

Kingdom relations are expected to be dominated by coronavirus concerns for the foreseeable future. “Government will continue to work closely with its kingdom partners to address existing capacity and liquidity challenges,” said Holiday.

Concerning the virus, government is confident that its containment is possible if all adhere to health and safety protocols.  “From our experience we know that these measures worked to flatten the curve during the period April through June. We can therefore draw inspiration from the knowledge that we can contain the spread of the virus.

“The resurgence and spread of the virus since July, however, have taught us that we cannot be complacent or let our guards down. To the contrary, we must remain vigilant and steadfast. This is a must, because we will remain at risk for as long as there is no vaccine or cure,” said Holiday.

As St. Maarten approaches its 10th anniversary as an autonomous country in the Dutch kingdom, the Governor called on MPs to act with a sense of urgency and common purpose, “One based on the conviction that together we can and will rise to meet the challenges of COVID-19, a task which calls for effective collaboration across the board – Collaboration which recognises the value of unity, the imperative of sacrifice and the virtue of humanity in moments of crisis,” he concluded.