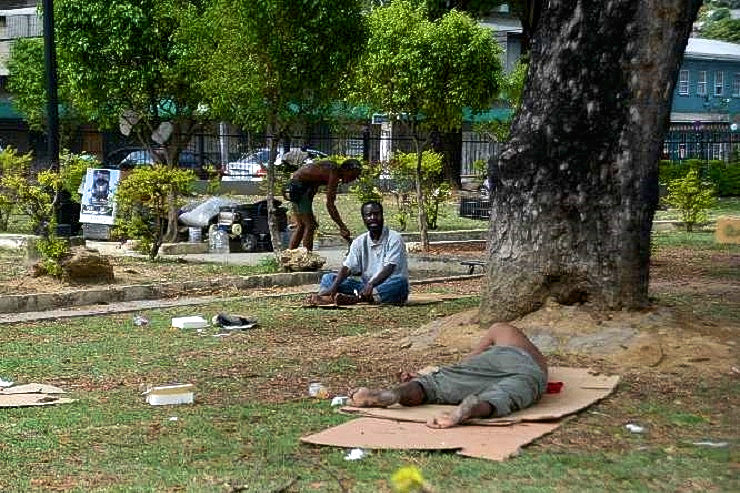 PORT OF SPAIN, Trinidad–A group of homeless people who sleep in Tamarind Square in Trinidad and Tobago’s capital have filed a lawsuit challenging the Port of Spain City Corporation’s decision to lock them out.

The corporation has locked four of the five gates around the square, and there is a padlock on the fifth, but it has not yet been locked.

Represented by Senior Counsel Christopher Hamel-Smith and other attorneys Krystal Richardson and Imran Ali, the city dwellers led by Hugh Bernard are seeking a judicial review of the decision, arguing that the Corporation’s decision to put padlocks on the gates around Tamarind Square is illegal.

They not only want the Corporation to leave the gates unlocked so they can continue to access the square until a viable alternative is available to them, but they want the court to order the City Corporation to provide tents and access to portable toilets, according to the Newsday newspaper.

They are also seeking damages.

The matter first came up for hearing before Justice Eleanor Donaldson-Honeywell on Wednesday, May 25, but it was adjourned until October 6.

A Centre for Socially Displaced Persons (CSDP) was set up in 1991 for the homeless, but Bernard claims the conditions there are inhumane.

“The deplorable and inhumane state of the CSDP has forced many of the socially displaced persons of Port of Spain to seek refuge elsewhere, many of them seeking sanctuary in Tamarind Square,” the lawsuit stated, adding that there is no practicable alternative to Tamarind Square in Port-of-Spain and to deny the homeless access to it would be denying their constitutional right to life, liberty and security of person. ~ Caribbean360 ~

August 3, 2021
0
Constitutional Court President Bob Wit.   PHILIPSBURG--On July 22, 2021, a case management conference was held in the matter filed by the Ombudsman with the Constitutional...

August 3, 2021
0
Constitutional Court President Bob Wit.   PHILIPSBURG--On July 22, 2021, a case management conference was held in the matter filed by the Ombudsman with the Constitutional...