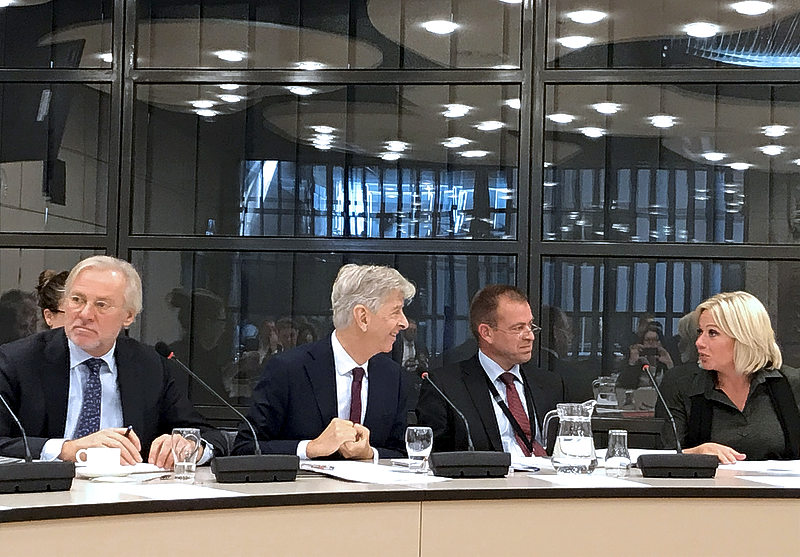 THE HAGUE–Twenty-five evacuated St. Maarteners who came to the Netherlands after Hurricane Irma have asked Dutch municipalities for houses and other assistance.

Dutch caretaker Minister of Home Affairs and Kingdom Relations Ronald Plasterk stated this during a debate in the Second Chamber of the Dutch Parliament on Thursday. There was much attention for St. Maarten, even though the Dutch Caribbean Coast Guard was the agenda point of this meeting of the Permanent Committee for Defence.
Plasterk gave the 25 St. Maarteners as an example of the far-reaching and complicated effects of Hurricane Irma. “These people are reporting at the municipalities: ‘We don’t have a home anymore, what are you going to do for us?’”
Plasterk said the Dutch Government was looking into a solution for this group in consultation with the municipalities, the Salvation Army and the Central Organisation for the housing of asylum seekers COA. He said the legal issues were also being looked at.
The present Members of Parliament, André Bosman of the liberal democratic VVD party, Gabriëlle Popken of the Party for Freedom PVV, Ed Knops of the Christian Democratic Party CDA and Selima Belhaj of the Democratic Party D66, offered their sympathy to the victims of Hurricane Irma on the Windward Islands and thanked the Dutch Government, especially Defence, for its massive input to help the people.
“Knowing that everything is gone, destroyed: homes, hotels, businesses, people’s lives – the pain is unimaginable. But the Dutch Caribbean Coast Guard was there to help, together with the Marines and other Defence personnel. The Coast Guard is showing its value time after time,” said Bosman.
Popken addressed the looting immediately following the hurricane. “It shows St. Maarten’s weak spot. People not only took food because they were hungry, but they willingly broke into businesses and stole large screen TVs and other fancy equipment,” she said, criticising the local authorities who were not present while instead blaming the Dutch Marines for “not doing anything,” as Prime Minister William Marlin stated in an interview with a Dutch newspaper.
“Prime Minister Marlin has said that he was sorry about what he said and he has lauded the work that Defence is doing. While Marlin’s initial remarks criticising the military were broadly publicised in the Dutch media, his apologies received little attention in the media,” said Popken.
Knops (CDA) asked whether the Coast Guard was sufficiently equipped to deal with the disaster situation in St. Maarten, especially considering the large cutbacks at Defence in the past years. He said the Dutch Government had not sufficiently anticipated while cutting back on structural means, investments and capacity.
“Calamities such as this one prove the organisation’s fragility. The shoddy work of the past years has to end,” Knops said. Several hundred million euros are needed to invest in maintenance in the coming years, but those funds have not been budgeted as yet.
Defence Minister Jeanine Hennis-Plasschaert explained that Irma had severely affected the Coast Guard station in St. Maarten. The building was damaged and the two RHIB boats can be considered a total loss. She expressed great appreciation for the Coast Guard personnel, who have been doing a “fantastic job” despite the fact that their families were affected by the storm.
Hennis-Plasschaert said the Coast Guard has been fully deployed, also through the two Dash-8 aircraft which have been shuttling between Curaçao and St. Maarten. The air capacity is sufficient and additional cost will be carried by the Netherlands.
MP Belhaj (D66) said the Coast Guard was a special cooperation within the Kingdom, and that Hurricane Irma has proven that it is important to act as one. She asked Ministers Hennis-Plasschaert and Plasterk to consider including a special structural financial buffer in the Coast Guard budget for hurricane response. Knops agreed with Belhaj. “Shouldn’t we aim for a sustainable input?”
Plasterk responded that Belhaj’s suggestion to build in structural hurricane response funds would be discussed in the recently established Coast Guard Governance work group which will look at the long-term financing for the Coast Guard. He confirmed that new investments were necessary because most of the material dates back from before 2010, but that a next government would have to decide on the financing.