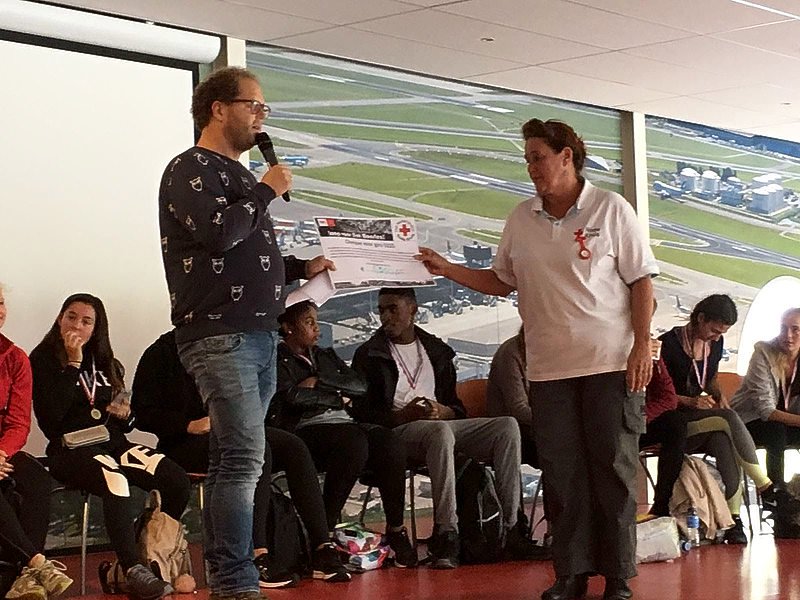 HOOFDDORP–An enthusiastic contribution for the reconstruction of St. Maarten was made by students and supporters of the Travel and Hospitality section of the MBO College Airport in Hoofddorp, which is part of the larger ROC Amsterdam. Students ran three distances and collected 6,650 euros.

The longest run of 68 kilometres was from the town St. Maarten in the province North-Holland, via Haarlem to Hoofddorp. Under the motto “Show them what you’ve got” 16 students and two staff members ran the course in the dune area from St. Maarten’s Sea via Petten, Schoorl, Bergen, Egmond aan Zee to Wijk aan Zee on October 4.
Having arrived in IJmuiden in the evening, the runners stayed the night in the Apollo Hotel IJmuiden, where they were provided with a dinner and breakfast sponsored by the hotel. The following day, the first group of runners was joined by a second group of the 16-kilometre run, consisting of 46 students and five staff members from Haarlem.
The two groups ran through the centre of Haarlem, via the Spaarne River to Vijfhuizen, and ended their run at the MBO College Airport in Hoofddorp. That same day, more than 200 students and staff members participated in a two-kilometre run in Hoofddorp. Several fundraising activities were held at the school where students sold home-baked cake and cookies, painted nails and braided hair.
Two special guests spoke to the students at the school. Romilia, a family member of one of the students, told the harrowing story of Hurricane Irma and her flight to the Netherlands with her two young children. Romilia lost everything and will have nothing more to return to in St. Maarten than the makeshift home her husband is constructing.
Representative Angelique van ‘t Riet of Wings for Animals explained to the students that many animals in St. Maarten have perished and that a lot of pets have lost their homes. She expounded on the initiatives to assist animals in need. The students and staff were struck by Romilia’s and Angelique’s stories.
Teacher Martijn Smit proudly presented a cheque for 6,650 euros to Red Cross representative Thea van der Heide, which included a donation from the school’s management. Manager Luisa Prando praised the students and staff for their efforts and the support they showed for St. Maarten.