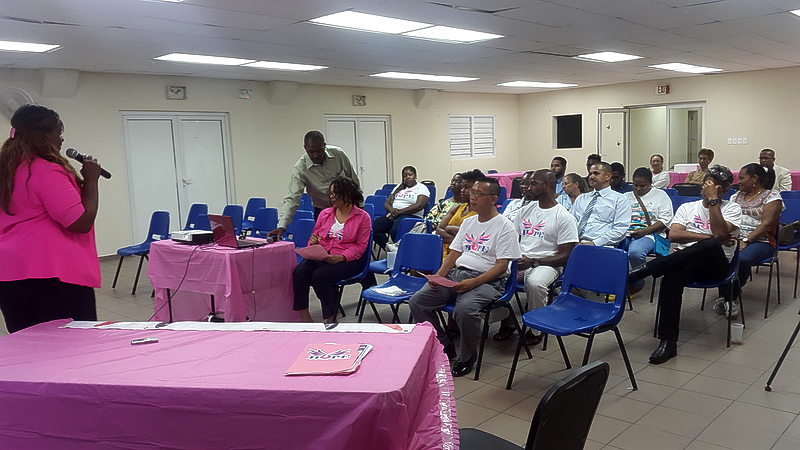 HOPE President Mercedes van der Waals-Wyatt called on the community to share insights and ideas to add to the manifesto. The same was expressed by Jacinto Mock of Social Reform Party and Loekie Morales of Beyond St. Maarten Party, both of whom have joined HOPE for the September 26 Parliamentary Elections.

HOPE presented 11 priority areas to the public starting with a “stable economy and a sound budget” via “diversifying the economy and tourism product,” and develop agriculture and financial services.

Enhancement of quality of life for everyone with affordable housing, better schools, afterschool and feeding programmes are priorities for HOPE.

“Ensuring that every household has access to basic services – electricity, water, internet, basic sanitation” are also goals in the manifesto.

In the area of crime prevention and public safety, HOPE plans to educate youth through training/apprentice programmes and stimulate sports, introduce and execute safety and security plans.

Van der Waals-Wyatt said the party plans to revise the educational system to connect with the region (for example teaching in more languages) and aligning the curriculum with the needs of the job market.

All St. Maarten people should enjoy the same rights and opportunities. “Women should have equal pay as men,” the party president said.

HOPE has as a focus the introduction of alternative energy options, complete the waste-to-energy plan and recycling.

The creation of a better quality of life for the elderly with Social services and programmes are planned by HOPE.

The party intends to put focus on environmental awareness, enforcement of legislation, the creation of at least one terrestrial protection zone, regulation for a better public transportation and parking systems and nation building programmes.

HOPE’s long term focus and philosophy is “to set the example” in good governance, continuous education and awareness on integral laws of the country.

Among those attending the manifesto launch was retired pastor Wycliffe Smith, leader of St. Maarten Christian Party (SMCP). He and Van der Waals-Wyatt recently completed a course on good governance at the University of St. Martin. Good governance has been a buzz word especially among the new political parties taking part in the snap elections.

The launch was wrapped up with a question and answer session.

Van der Waals-Wyatt also called on voters to endorse HOPE’s slate of candidates on August 9 at the Civil Registry on Pond Island. As a new party without a seat in Parliament, HOPE needs 146 signatures (one per cent) of the eligible voters from the 2014 Parliament Elections to be on the ballot.