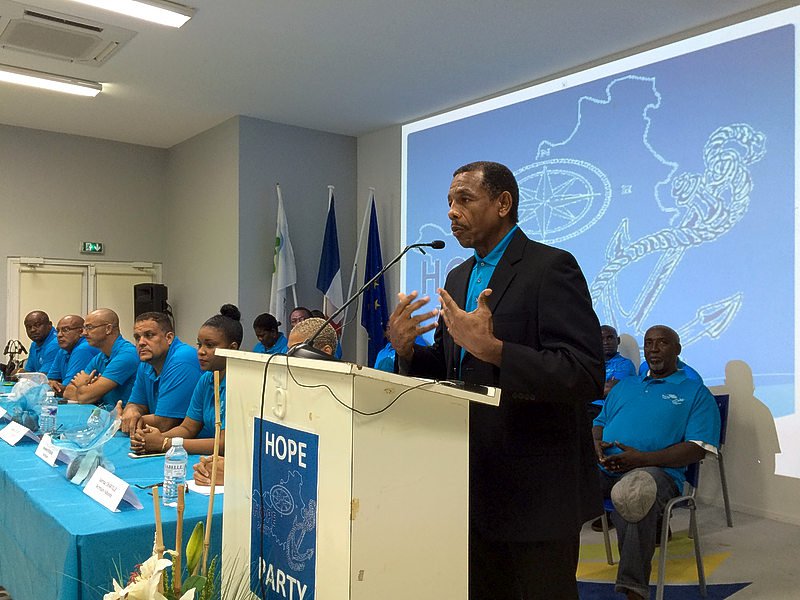 MARIGOT–With the 2017 Territorial Elections a matter of ten months away, independent Councillor Jules Charville’s Hope Party became the first structured party to officially declare it will present a list for next year’s election at a public meeting in the Chamber of Commerce Monday evening.

Jules Charville was on the list of Daniel Gibbs for the 2012 elections and sat on the opposition bench before deciding to go independent.

Political intentions for 2017 from the corridors of power have been quiet up to now, although it is assumed discussions and negotiations are going on in earnest behind closed doors.

Verbally, though not yet officially, intentions to form lists in 2017 have been heard from former President Alain Richardson, Louis Mussington, Guillaume Arnell and Aline Hanson.

Transforming the name from True Hope for St. Martin to Hope, Charville, as President of the board, presented a party a year in the making that appears cohesive and organised. Members were dressed in smart blue polo shirts, matching the blue balloon décor of the Chamber’s conference hall.

Each of the board members and other members were invited to express their reasons for joining Hope Party.

Jeannette Boirard began her statement with a proverb: “Give a man a fish and you feed him for a day, teach a man to fish and he has food for a lifetime.”

“The government over the years neglected to teach us to fish,” she said. “It’s about time we have changes in St. Martin. I’m happy to be with the party and I like its ideology. Bring us your ideas so we can make a better St. Martin.”

When he was finally invited to the podium to enthusiastic applause, Charville began his speech by issuing a damning indictment on Triple R’s record in power, noting today’s incarnation of the party is far removed from his vision of it in 2007.

“It’s a complete disaster. There has never been Rassemblement (togetherness), to the contrary, there is confusion; instead of Responsabilité (responsibility) we have irresponsibility; and instead of Réussite (success) we have failure,” he said. “It is chaos, and let’s not forget the division in the majority party at the time of the Senatorial election in 2014, where I, as an independent councillor, suddenly became very important to everyone.

“It is then that I realised the leaders were ready to sell their souls in order to get power. It told me that we have leaders that don’t care about the population. It’s about themselves, about titles, about position, and about money.

“I said to myself, I have to find people to work with to save the country, knowing that the country is in trouble. I took my time to find people and selected, one by one, some of them that you see tonight. You will see that they are willing to work from the heart for their country.

“This party is about you, the people. We expect you to be actively involved in everything we do. It’s your party.”

Charville said Hope Party would serve as the platform to form the list for the 2017 election. He stressed that his daughter, Sabrina Charville, will not be on the future list.

Jules Charville entered politics in 1977 and was elected as a Municipal Councillor in the former Commune from 1983 to 1992. In 2007, he became one of the architects in the formation of the Triple R party. In 2012, he joined the list of Daniel Gibbs’ Union for Democracy (UD) list, but six months after serving in the opposition, he decided to go independent.

He has spoken out consistently on controversial issues of the day, such as the “50 pas Géometriques,” the zoning plan PLU and the Minville saga, and defended the local restaurateurs of Orient Beach with their grievances at the beginning of this year.