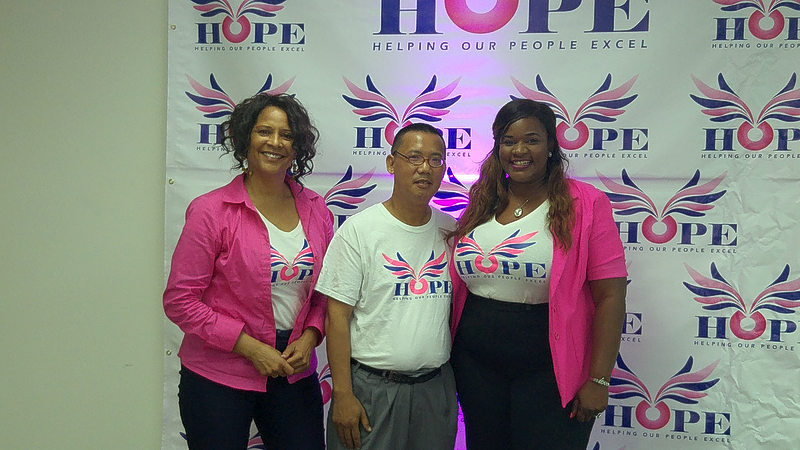 PHILIPSBURG–A list of three persons, representing the three parties now part of Helping Our People Excel (HOPE), will be candidates on HOPE’s slate for the September 26 Parliamentary Elections.

Morales, a programme manager and author, had her own party, Beyond St. Maarten, prior to joining Van der Waals-Wyatt on HOPE. Both women are contesting the elections for the first time.

Mock, a businessman, has contested elections in the past, but has never been successful. He was a candidate with the National Alliance (NA), before creating his own party Social Reform Party that ran in the August Parliamentary Elections.

As a new party without representation in Parliament, HOPE must get its slate endorsed by 146 signatures from voters, one per cent of the voters cast in the last election. The endorsement of the lists of all parties without a seat in Parliament will take place on Tuesday, from 9:00am to 4:00pm, at the Civil Registry on Pond Island. A voter can only endorse one list and must have either their identity card or Dutch passport to exercise their right to support a list.

Van der Waals-Wyatt called on voters to support her HOPE by heading to the Civil Registry on Tuesday. “Endorsing the new political list does not mean you are voting for them. It just means that you are giving them a chance, lending your support to contest the election and perhaps be a sense of fresh air to the current political scenery with new ideas, visions and messages,” she said on Sunday.

Eight other parties are registered for the September 26 elections. Of those, HOPE, St. Maarten Christian Party (SMCP), St. Maarten Development Movement  (SDM), People’s Progressive Alliance  (PPA) and One St. Maarten People Party  (OSPP) must have their list endorsed to actually make it to the ballot. The other four parties have already secured their place on the ballot by having earned seats in Parliament in the last election.