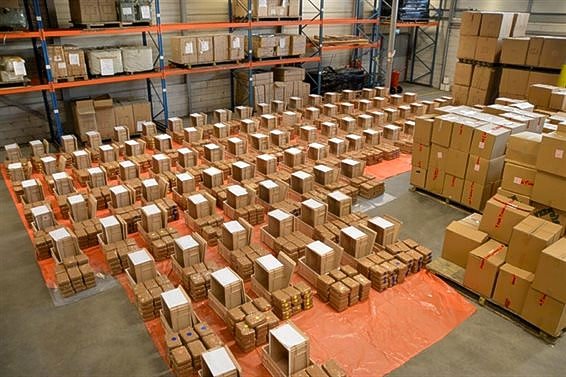 The 2,900 kilo cocaine were packaged, placed in crates and hidden in moving boxes from Curaçao. This photo, released by Rotterdam authorities, shows the packages containing the coke along with the crates, and on the right the moving boxes, inside a hall at the Rotterdam harbour.

ROTTERDAM–Rotterdam Customs have discovered an extremely large quantity of cocaine, 2,900 kilo’s in total with a street value of more than 100 million Euros, in a container from Curaçao.

The discovery was already made on March 11, but authorities kept quiet in the interest of the investigation. The drugs heist, referred to as “enormous, ” was announced by the Rotterdam Public Prosecutor’s Office on Thursday, April 28.

The 2,900 kilo cocaine, wrapped in packs, were found in crates inside moving boxes, which in turn were placed in a container that came in from Curaçao at Rotterdam’s Waalhaven. In total it concerns 100 moving boxes and 200 crates.

A large-scale, broad investigation was initiated following the discovery on March 11 by the Rotterdam Hit and Run Cargo Team (HARC Team), which is a cooperation of the Customs, Maritime Police and the Financial Intelligence Investigation Unit FIOD under the guidance of the Public Prosecutor’s Office.

The container had the town of Kranenburg in Germany, just over the border near Nijmegen, as final destination. An investigation has also started in Germany. So far, no arrests have been made in this case which made national headlines in the Netherlands on Thursday.

The drugs were immediately destroyed. It was the third largest cocaine heist ever in Rotterdam. In 2004, Customs discovered 4,200 kilo cocaine among a batch of steel cables, and in 2014 some 3,000 kilo cocaine were found in a container with cassava. The March 11 heist from Curaçao covers about one third of the total amount of drugs that were detected in Rotterdam in 2015.

Only two weeks ago, Rotterdam authorities confiscated 500 kilo coke with a street value of more than 15 million euros that came in by boat from Curaçao on April 3. The drugs were hidden in a fairground attraction. To be more precise: in the hollow arms of the sling shot. In this case, a man residing in The Hague was arrested.