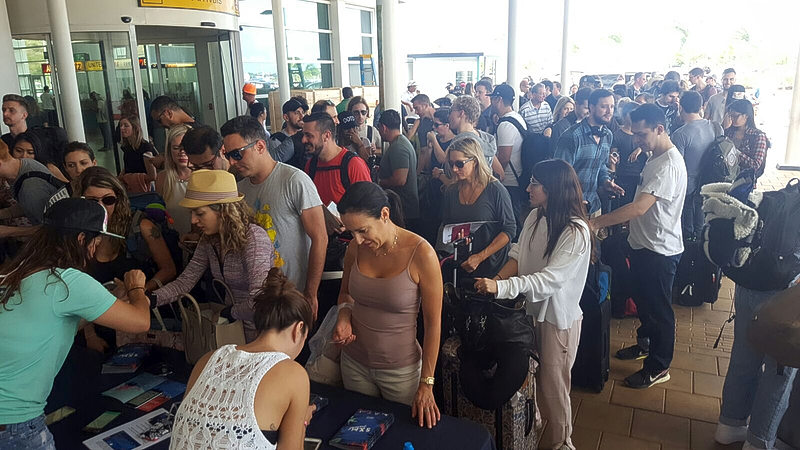 AIRPORT–The Princess Juliana International Airport SXM saw the first wave of music festival lovers hyped and excited for the second annual SXM Music Festival presently going on until this Sunday. The organisation announced that they sold just over 3,000 tickets internationally.

In collaboration with Airport SXM, the organisers of the event were able to set up an on-site box office where the hundreds of Festival goers are able to check-in for the event and pick up their passes. Due to the large number of attendees that were at the airport box office, some chose to carry on to the hotel and grab their passes later at Happy Bay or other venues, though the gesture of being able to get your passes as soon you come off the plane was very much appreciated.

“This is the first festival I’ve ever been to where I was able to get my pass right off the plane, that’s pretty cool” said Ivan, a Festival goer from San Francisco who arrived on Wednesday. “Many more are expected to arrive between today [Wednesday – Ed.] and Saturday, but we think by today the first 1,000 people should have arrived,” said Julian Prince, Director of the Festival and President of Two Bunch Palms Foundation that organises the event,

The Festival features the crème of international deejays and electronic music talent, SXM Festival prides itself upon drawing the most discerning crowd of music lovers. The name “SXM Festival” is derived from St. Maarten’s three letter airport code SXM. Locals are welcome to party also and can find the schedule online or on the organisation’s Facebook page.