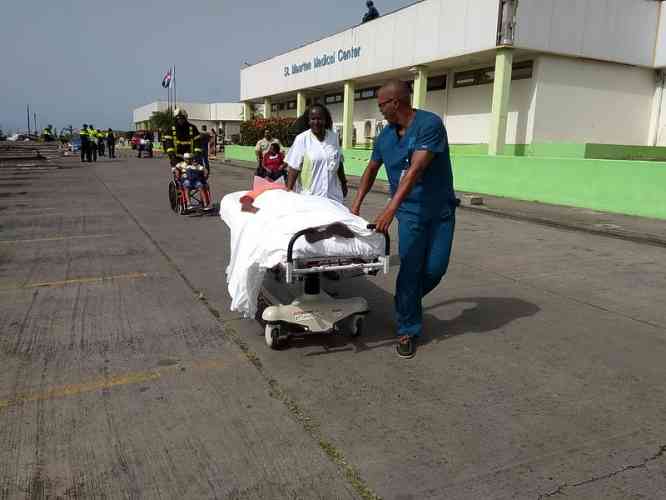 CAY HILL–The scenario of the Hurricane Exercise 2018 Hurex on Tuesday morning was a section of St. Maarten Medical Center (SMMC) catching fire and actors who were playing patients for the exercise being evacuated by emergency personnel.

HUREX takes place annually and includes the 10 Emergency Support Functions (ESFs) of the country’s Disaster Management Organisation along with the Dutch military detachment based on the island and additional military resources and assets from overseas.

The scene was set and at 9:05am police officers rushed into SMMC and to the back of the building where “patients” were being evacuated. Ambulances and firefighters arrived minutes later and started to separate “patients” based on priority before loading them into ambulances and other medical response vehicles.

Firefighters secured the building and assisted police officers with evacuating “patients.” Meanwhile, real patients and clients of the hospital continued making use of the facility.
The exercise allows all relevant government agencies along with the military to familiarise themselves with operational protocols in the event of a disaster or a hurricane threat.

The “burn victims” waited to be transported based on availability of emergency response vehicles. They were carried to a site at Divi Little Bay Beach Resort and to the White and Yellow Cross headquarters in St. John’s. The scenario was not as dramatic as those of previous years, which showed actors having fake blood gushing from their bodies or several victims being pronounced dead by medical field experts.

The Fire Department wanted to change dynamics this year and have a scenario that focused on toxic fumes threatening the surrounding areas while the island’s only major hospital was on fire. Police manned the traffic flow in Cay Hill and motorists driving to and from the hospital had minor inconveniences.

The marines stationed on island also participated in the exercise. They provided transport to some of the patients and assisted emergency teams with tents to give shade to the “patients” and workers who were outside in the blazing sun during the scenario on Tuesday.
In the event of a real disaster or post-hurricane incident, responses to a major incident will include military and civil authorities such as police, Ambulance and Fire Departments, Voluntary Corps of St. Maarten and other emergency response services and non-governmental agencies.