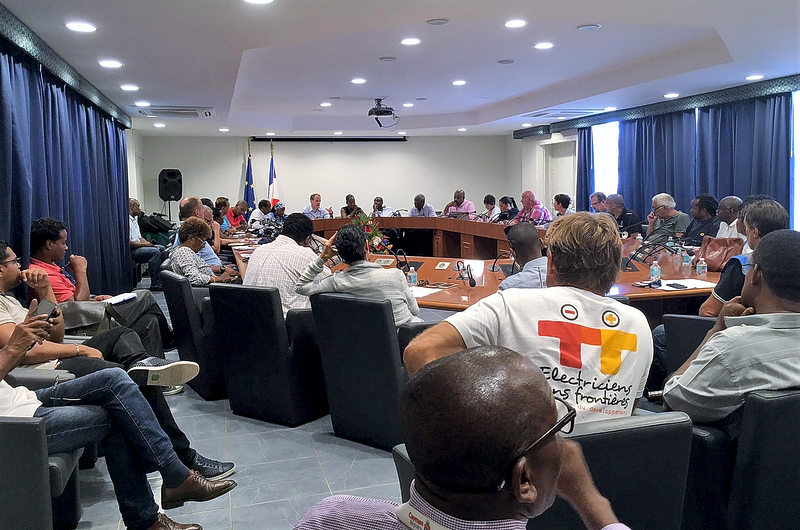 MARIGOT–The Chamber of Commerce in Concordia has noted 788 businesses on the French side have estimated damage from the hurricanes to be in the region of 300 million euros so far. This coincides with a meeting to be held in the Chamber of Commerce today, Friday, at 10:00am for business professionals who will be received by Délégué Interministériel, Philippe Gustin, in charge of reconstruction.

The Chamber added 350 files for emergency aid for beneficiaries of Régime de Securité Social des Independents (RSSI) were forwarded to Guadeloupe for processing. Persons who have not yet filed have until October 2 to do so.
Elsewhere, the Collectivité gave an update on the general situation on the territory. With regard to the tourism sector a public/private assessment is in progress to ascertain the possibilities of which restaurants, bars, guest houses, villas, and hotels, can re-open in November.
For the cleaning of the island the Collectivité is being assisted by the regiment of adapted military service RSMA and the Marine Nationale whose supply ship “Tonnerre” has brought heavy equipment and manpower, including machines to demolish public buildings that cannot be saved. Some 90 per cent of main roads have been cleared.
11 locations are available in the territory to dispose of garbage. Bins have been installed in Sandy Ground for the use of residents. The Department of Environment and Sustainability indicated regular garbage collections will return to normal from October 6, 2017. The population is asked to separate household garbage from construction debris and green waste to make it easier for clean-up workers.
The Human Resources Department has been registering children to return to school at the former Bord de Mer School from 8:00am to 12:00pm. Today, Friday, is the last day for registration. President Gibbs has instructed that buildings or emergency structures are made fully secure and equipped to receive children. The Rectorate is due to give an official date for a return to school.
The Department of Solidarity and Families is receiving persons who have no lodgings as a result of the hurricanes or who had no insurance coverage.
The post office (La Poste) announced it will be receiving and sending mail as of Monday, October 2, but for urgent situations. It will give more details shortly. Electricité de France (EDF) said 67 per cent of residents now have power and by the end of the week it will rise to 80 per cent.
Water production from UCDEM is operational. Générale des Eaux is continuing with its inspection of the water lines for any leaks. To date 45 per cent of residents are connected with water. It will still take several more days to have an optimal distribution of water. Meanwhile drinking water is being distributed daily at 13 locations since September 24.
As of September 30, food and water distribution will be exclusively reserved for families in difficulties as identified by the Department of Solidarity and Families.