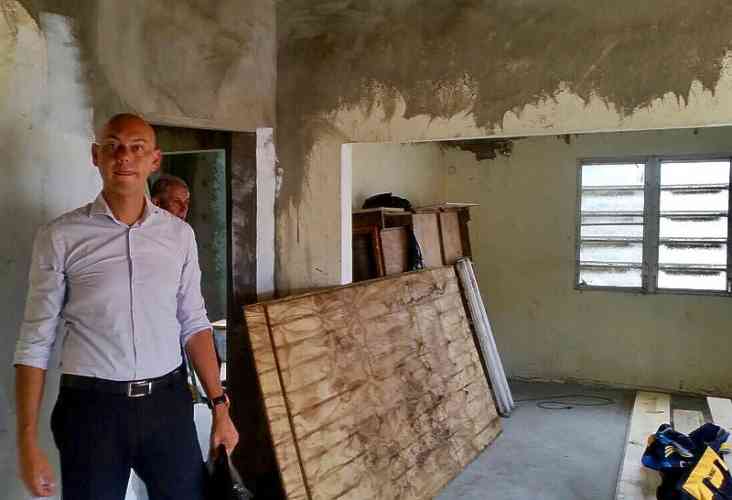 Mel Raboen de Sanchez Pacheco visits one of the many homes in St. Eustatius that were damaged by the hurricanes.

ST. EUSTATIUS–Repair work in the aftermath of last September’s devastating hurricanes is on schedule. This despite an early backlog due to limited infrastructure, capacity shortages and the large demand from the entire region for building materials.

Last year, when Hurricanes Irma and Maria blasted their way across the rooftops of Oranjestad, St. Eustatius, the Dutch Government response to finance and fix the damage came as fast as humanly possible.

“Logistics were a real problem,” admits Project Manager Mel Raboen de Sanchez Pacheco, who was assigned by the Dutch Ministry of Home Affairs and Kingdom Relations BZK to coordinate housing repair on the island.

“Companies could not cope with the huge regional demand for construction materials. Transhipment was also unpredictable. Sometimes building material had arrived ‘on paper,’ but in reality it was not there. Whereas our decision to supply building materials for cyclone repair was immediate, our wait for freight to arrive on Statia was decided by big swells at sea due to the hurricanes themselves,” he said. It took several weeks for Caribbean shipping lanes to revert to business as usual.

Fortunately, the “Historical Gem” was saved from the widespread devastation suffered by neighbouring St. Maarten. Nevertheless, Raboen de Sanchez Pacheco was quickly involved with a programme of more than 100 home-repair projects.

He was determined to make the roofs in Statia more robust and resilient. He did so with the cooperation of a powerful team of professionals, local contractors, non-governmental organisations (NGOs) and many volunteers.

He said they are currently almost halfway through the programme. “The rest will be achieved as soon as possible – at least by September. Gaping roofs were our obvious priority and together with local builders we were quick to protect the damage before replacing or repairing it. A total of 15 roofs were badly damaged. Lessons have to be learned about building regulations and codes for earthquake and hurricane protection,” Raboen de Sanchez Pacheco insists.

“Last November, we teamed up in a workshop to agree and improve the building specifications for earthquake and hurricane protection. Together with local contractors, an engineer involved in building regulations for Saba and Statia and my team, we were able to reduce the risk factors.”

Before being rushed to the island to carry out these repair projects, Raboen de Sanchez Pacheco had all already been working at the Ministry of BZK for some considerable time.

His main role there was to secure funds from the European Union’s European Development Fund (EDF) for major infrastructural projects, which were specifically earmarked for the Overseas Countries and Territories of the Kingdom of the Netherlands.

“This work was equally challenging in that it involved vast sums of investment that have to be overseen every step of the way. My work experience on Statia is therefore of a smaller scale but far more rewarding. The project and the people behind it mean a lot for the whole social welfare of the island. I feel fortunate that I get to see the real Statia, and that is something that has touched me enormously. The people of Statia have kidnapped my affections and these will not be released for a long time.”