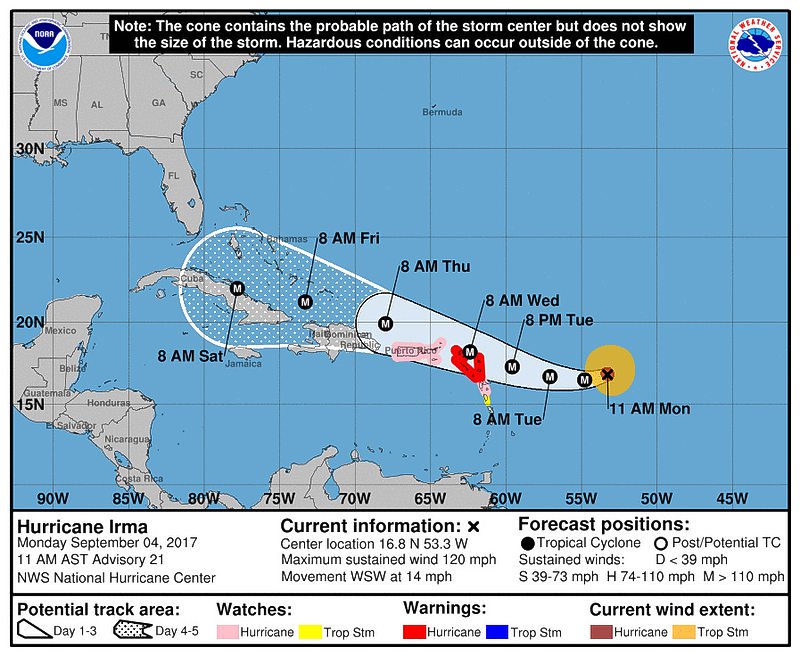 The government of Antigua has issued a Hurricane Warning for the islands of Antigua, Barbuda, Anguilla, Montserrat, St. Kitts, and Nevis. A Hurricane Watch has been issued for the British Virgin Islands.

The government of the Netherlands has issued a Hurricane Warning for the islands of Saba, St. Eustatius, and Sint Maarten.

The government of France has issued a Hurricane Warning for St. Martin and Saint Barthelemy. A Hurricane Watch has been issued for Guadeloupe.

A Hurricane Watch has been issued for the U.S. Virgin Islands, Puerto Rico, Vieques, and Culebra.

The government of Barbados has issued a Tropical Storm Watch for Dominica.

A Tropical Storm Watch is in effect for…
* Dominica

A Hurricane Warning means that hurricane conditions are expected somewhere within the warning area. A warning is typically issued 36 hours before the anticipated first occurrence of tropical-storm-force winds, conditions that make outside preparations difficult or dangerous. Preparations to protect life and property should be rushed to completion.

A Tropical Storm Watch means that tropical storm conditions are possible within the watch area, generally within 48 hours. Interests in the Dominican Republic, Haiti, the Turks and Caicos Islands, and the southeastern Bahamas should monitor the progress of Irma.

DISCUSSION AND 48-HOUR OUTLOOK
——————————
At 1100 AM AST (1500 UTC), the eye of Hurricane Irma was located near latitude 16.8 North, longitude 53.3 West. Irma is moving toward the west-southwest near 14 mph (22 km/h). A turn toward the west is expected later today, followed by a west-northwestward turn late Tuesday. On the forecast track, the center of Irma will move near or over portions of the northern Leeward Islands Tuesday night and early Wednesday.

Maximum sustained winds are near 120 mph (195 km/h) with higher gusts. Irma is a category 3 hurricane on the Saffir-Simpson Hurricane Wind Scale. Additional strengthening is forecast through Tuesday night.

The estimated minimum central pressure based on data from a NOAA Hurricane Hunter aircraft is 944 mb (27.88 inches).

HAZARDS AFFECTING LAND
———————-
STORM SURGE: The combination of a dangerous storm surge and large breaking waves will raise water levels by as much as 6 to 9 feet above normal tide levels along the coasts of the extreme northern Leeward Islands within the hurricane warning area near and to the north of the center of Irma. Near the coast, the surge will be accompanied by large and destructive waves.

SURF: Swells generated by Irma will affect the northern Leeward Islands during the next several days. These swells are likely to cause life-threatening surf and rip current conditions. Please consult products from your local weather office.