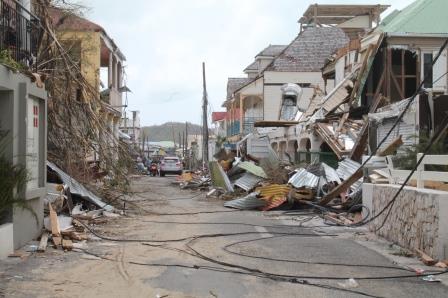 MARIGOT—French-side authorities confirmed 10 persons have died as a result of the passing of Hurricane Irma on Tuesday night, and that figure is expected to rise in the coming days. The circumstances surrounding those deaths were not known. It was understood five persons died in French Quarter alone.

Post-apocalyptic scenes of devastation throughout the French side confirmed the unprecedented ferocity of Hurricane Irma. President of the Collectivité Daniel Gibbs noted 95 per cent of French side infrastructure has been destroyed and thousands of inhabitants left displaced. He confirmed a state of emergency related to natural catastrophe has been declared.

Communications have been severely affected, as have the utility providers. Electricity plant EDF is still functioning but the UCDEM water desalination plant was badly damaged in the storm. Emergency supplies of food, water, and building materials are in the process of being shipped or flown in.

An EDF spokesman said the plant received a big hit but the third phase is up and running and feeding the hospital and airport. Customers who have their networks underground are receiving power first. Transformers were damaged and power lines from Agrément to Orient Bay also came down. However a team from Guadeloupe is arriving to help restore power. In addition 10 generators and cables have arrived by ship and more generators are coming from France.

Technicians are working hard with operators to restore the mobile and land line networks. Many people have been seen parking the cars near the Orange cell tower on Morne Valois to make calls where there is reportedly a strong signal.

With the Préfecture on Fort Louis hill completely destroyed and Hotel de la Collectivité not operational, authorities moved their operations center to the Semsamar building on the waterfront.

French Minister of Overseas Territories Annick Girardin on island to assess the destruction said on Sunday at a packed news conference with mostly national media St. Martin had been hit “extremely hard” by a hurricane the intensity of which has not been seen before on the French islands. Consequently managing the crisis is very complex but the State and the Collectivité are doing their utmost, she insisted.

“We are now in a phase to rebuild the lives of St. Martiners and reconstruct the territory”, she said. “Our priority is first to assist people in trouble, assess the damage and then to provide security. The State has sent 1,400 supplementary personnel to assist and by tonight there will be more 2,000 here to help.

Law and order is about to be restored on the territory. Our priority is to get the airport and the Galis Bay port functioning. We must allow people who want to leave the island to do so in the normal manner. That is a priority first of all for those who were injured, the elderly or vulnerable.”

Commandant Sébastien Manzoni indicated a battalion of some 80 Gendarmes arrived from Guadeloupe a day after Irma passed to reinforce security. Another 80 arrived from Paris just before the passing of Hurricane Jose.

On Sunday two SWAT teams were expected to arrive, with vehicles for patrols, a helicopter, and logistics personnel. All told, an extra 650 to 700 Gendarmes, of all skills, will be on island to reinforce security and stamp out looting, he said.

Military personnel, civil security, Red Cross, and more firemen (pompiers) are in the process of arriving.

Food and water distribution has started in the districts with security assured by Gendarmes to maintain order. Two military planes with food and water, and barges, are also on the way. 300 cubic metres of water was due to be distributed to the population on Sunday.

President Gibbs said everything that could be done to prepare for Hurricane Irma in conjunction with the State, was done.

“My first thoughts are with St. Martiners who have lost everything in this catastrophe. My total support and affection is with them and my condolences go out the families of victims. I share their pain and wish them courage. My team and I are completely committed to rebuilding St. Martin. My elected officials are mobilized around the territory to help citizens. I want to thank the Minister for being here to support us and to thank the friends of St. Martin throughout the world who have shown solidarity and for their pledges of help.”

Préfète Déléguée Anne Laubies indicated the State and the Ministry of the Interior will bring in air conditioned mobile offices to start restoring public services. The Conseil General of Guadeloupe will also be giving its full support for a gradual return to school, on case-by-case basis.