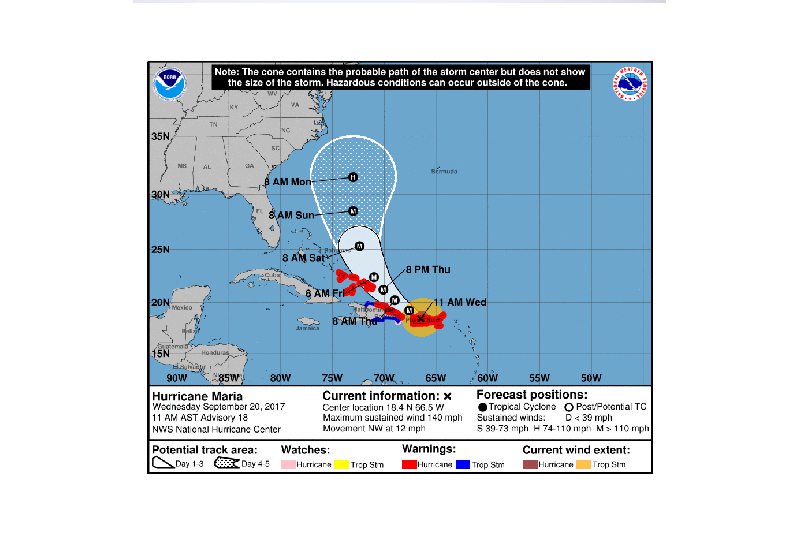 PHILIPSBURG–At 11:00am, the centre of Hurricane Maria was located inland over Puerto Rico near latitude 18.4 North, longitude 66.5 West. Maria is moving toward the northwest near 12 mph (19 km/h), and this general motion with a gradual decrease in forward speed is expected through early Friday.

The government of France has discontinued the Tropical Storm Warning for St. Martin and St. Barthelemy.

A Hurricane Warning is in effect for U.S. Virgin Islands, British Virgin Islands, Puerto Rico, Culebra, and Vieques, Dominican Republic from Cabo Engano to Puerto Plata, and Turks and Caicos Islands and the Southeastern Bahamas.

Maximum sustained winds are near 140 mph (220 km/h) with higher gusts. Maria is a category 4 hurricane on the Saffir-Simpson Hurricane Wind Scale. Little change in strength is forecast during the next 48 hours, and Maria is expected to remain a dangerous major hurricane through Friday. Hurricane-force winds extend outward up to 60 miles (95 km) from the centre, and tropical-storm-force winds extend outward up to 150 miles (240 km). The estimated minimum central pressure is 930 mb (27.47 inches).

Wind speeds atop and on the windward sides of hills and mountains and on high-rise buildings could be much stronger than the near- surface winds indicated in this advisory.

The combination of a dangerous storm surge and the tide will cause normally dry areas near the coast to be flooded by rising waters moving inland from the shoreline. The water is expected to reach the following heights above ground if the peak surge occurs at the time of high tide.

The deepest water will occur along the immediate coast near and to the north and east of the landfall location, where the surge will be accompanied by large and destructive waves. Surge related flooding depends on the relative timing of the surge and the tidal cycle, and can vary greatly over short distances. For information specific to your area, please see products issued by your local National Weather Service forecast office.

A dangerous storm surge accompanied by large and destructive waves will raise water levels by as much as 4 to 6 feet above normal tide levels in the hurricane warning area in the Dominican Republic, and one to three feet elsewhere along the northern coasts of the Dominican Republic and Haiti.

A dangerous storm surge accompanied by large and destructive waves will raise water levels by as much as 10 to 15 feet above normal tide levels in the hurricane warning area near and to the north of the centre of Maria for both the South-eastern Bahamas and the Turks and Caicos Islands.

Maria is expected to produce the following rainfall totals through Friday: Puerto Rico…12 to 18 inches, isolated 25 inches U.S. and British Virgin Islands…additional 5 to 10 inches, isolated 15 inches
Northern and eastern Dominican Republic, Turks and Caicos and southeast Bahamas…8 to 16 inches, isolated 20 inches and northern Haiti…2 to 4 inches. Rainfall on these islands will cause life-threatening flash floods and mudslides. Several tornadoes are possible over Puerto Rico and the U.S. Virgin Islands today.

Do not venture outside when the calm eye of the hurricane passes over, as dangerous winds will
return very quickly when the eye moves away.

Swells generated by Maria are affecting the Leeward Islands, Puerto Rico, and the Virgin Islands. These swells will begin affecting the northern coast of Hispaniola, the Turks and Caicos Islands, and the South-eastern Bahamas during the next day or two. These swells are likely to cause life-threatening surf and rip current conditions. Please consult products from your local weather
office.