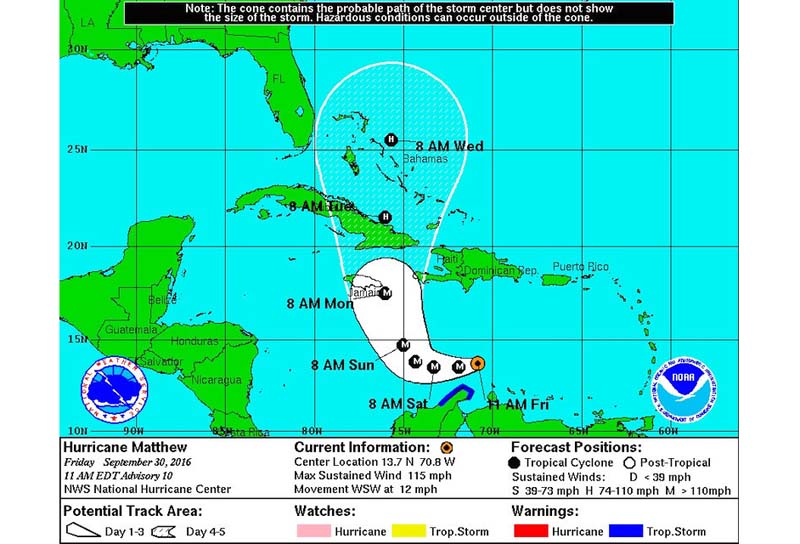 The government of Aruba has discontinued the Tropical Storm Watch
for Aruba.

A Tropical Storm Warning means that tropical storm conditions are
expected somewhere within the warning area, in this case in the
next 12 to 24 hours.

For storm information specific to your area, please monitor products
issued by your national meteorological service.

DISCUSSION AND 48-HOUR OUTLOOK
——————————
At 1100 AM EDT (1500 UTC), the center of Hurricane Matthew was
located near latitude 13.7 North, longitude 70.8 West. Matthew is
moving toward the west-southwest near 12 mph (19 km/h). A westward
motion at a slower forward speed is expected later today and
tonight. A turn toward the west-northwest is forecast by Saturday
night, followed by a turn toward the northwest by early Sunday. On
the forecast track, the center of Matthew will pass north of the
Guajira Peninsula later today and tonight and remain over the
central Caribbean Sea through early Sunday.

Data from an Air Force Reserve Hurricane Hunter aircraft indicate
that maximum sustained winds have increased to near 115 mph (185
km/h) with higher gusts. Matthew is a category 3 hurricane on the
Saffir-Simpson Hurricane Wind Scale. Little change in strength is
forecast during the next 48 hours.

The latest minimum central pressure based on data from the aircraft
is 968 mb (28.59 inches).

SURF: Swells generated by Matthew are expected to affect portions
of the coasts of Puerto Rico, Hispaniola, Aruba, Bonaire, Curacao,
Venezuela, and Colombia during the next few days. These swells are
likely to cause life-threatening surf and rip current conditions.
Please consult products from your local weather office.