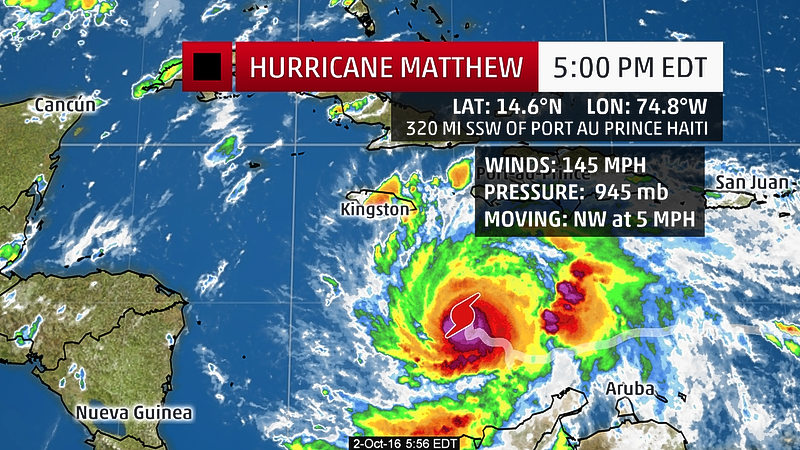 FLORIDA, US–Hurricane Matthew is poised to deliver a potentially catastrophic strike on Haiti beginning today, Monday, and poses a danger to eastern Cuba and Jamaica by tonight. Matthew will then crawl slowly through the Bahamas for several days before potentially flirting with parts of the US coast beginning this weekend.

Hurricane warnings are in effect for much of eastern Cuba and all of Haiti and Jamaica. Hurricane watches were issued early Sunday morning for the Turks and Caicos and southeast Bahamas, including the Inaguas, Mayaguana, Acklins, Crooked Island and Long Cay.

Some fluctuations in intensity are possible over the next couple of days, but Matthew is expected to remain a powerful hurricane as it makes its closest approach to Haiti, Jamaica, Cuba and the Bahamas.

Small, subtle changes in the path of the eyewall, sometimes not resolvable until hours before the passage, can make a large difference on wind impact.

Note that even though certain locations may not be in the cone of uncertainty, impacts will be spread well beyond the edge of the cone.

Impacts, such as outer rain bands and some initial tropical storm-force gusts were expected to begin in Jamaica and Hispañola (particularly Haiti) as soon as Sunday night, and in eastern Cuba as soon as Monday, making preparations difficult.

Battering waves will ride atop the storm surge, and coastal flooding from large waves may begin well in advance and ahead of Matthew’s centre.

Hurricane-force winds, with peak timing as outlined above, will lead to widespread structural damage, particularly to poorly-built structures, numerous downed trees and widespread power outages. Due to wet ground, trees will be even more susceptible to being toppled.

One possible analogue to Matthew is Hurricane Hazel, which swept through Haiti in October 1954, claiming 400-1,000 lives from severe flash flooding and landslides.

Beyond that, it remains uncertain how close Matthew’s eyewall will pass near the northwest Bahamas.

All interests in the Caribbean Sea, the Bahamas, US East Coast and Atlantic Canada should continue to monitor the progress of Matthew. Preparations in Jamaica, Haiti, Cuba and the Bahamas should be well underway.