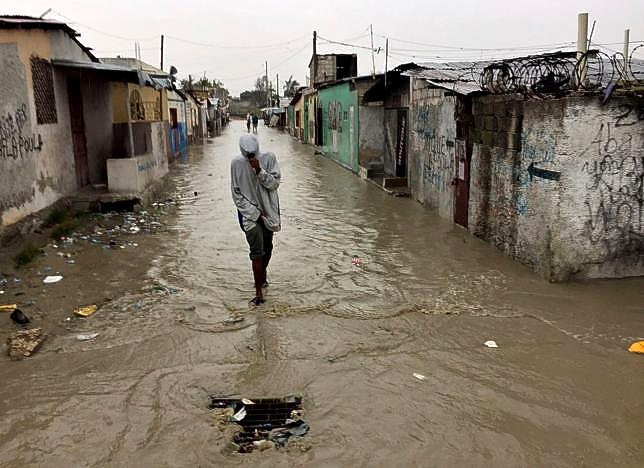 Hurricane Matthew dumped torrential rain across the island of Hispaniola that Haiti shares with the Dominican Republic, where four people were killed by collapsing walls and mudslides. In Haiti, at least one person was killed.By late evening, the cyclone was pounding the eastern tip of Cuba, the US National Hurricane Center said. In Cuba’s city of Guantanamo, the winds picked up and streets emptied as people moved to shelters or inside their homes.

Matthew is predicted to maintain Category 4 strength through the Bahamas and weaken slightly as it tracks toward Florida later in the week.

With communications out across most of Haiti and a key bridge impassable because of a swollen river, there was no immediate word on the full extent of potential casualties and damage from the storm in the poorest country in the Americas.

But Pentagon spokesman Peter Cook told reporters in Washington the US Navy was looking at possibly sending an aircraft carrier, the George Washington, and other ships to the region to aid relief efforts.

The US has already offered Haiti the use of some helicopters, said Haitian Interior Minister Francois Anick Joseph, who added that damage to housing and crops in the country was apparently extensive.

“It is too early to do a real assessment, but it has been very serious,” Anick Joseph told Reuters.

Named for the sandy islands off its shore and twice destroyed by hurricanes in the 18th century, the Haitian port town Les Cayes was hit hard by Matthew.

“The situation in Les Cayes is catastrophic, the city is flooded, you have trees lying in different places and you can barely move around, the wind has damaged many houses,” said Deputy Mayor Marie Claudette Regis Delerme, who fled a house in the town of about 70,000 when the wind ripped the roof off.

One man died as the storm crashed through his home in the nearby beach town of Port Salut, Haiti’s civil protection service said. He had been too sick to leave for a shelter, officials said. A fisherman was killed in heavy seas over the weekend as the storm approached, and another was missing.

Hurricane conditions remained in parts of Haiti and as much as 3 feet (1 metre) of rain was forecast to fall over hills that are largely deforested and prone to flash floods and mudslides, threatening villages as well as shantytowns in the capital Port-au-Prince.

The hurricane comes at a time when tens of thousands of people are still living in flimsy tents and makeshift dwellings in Haiti after a 2010 earthquake that killed more than 200,000 people.

Cuba’s Communist government traditionally puts extensive efforts into saving lives and property in the face of storms, and authorities have spent days organising teams of volunteers to move residents to safety and secure property.

The storm is expected to hit the tourist town of Baracoa in the province of Guantanamo, passing close to the disputed US Naval base and military prison and also to a small Cuban city of the same name.

The US Navy ordered the evacuation of 700 spouses and children along with 65 pets of service personnel as the storm approached. ~ Reuters ~