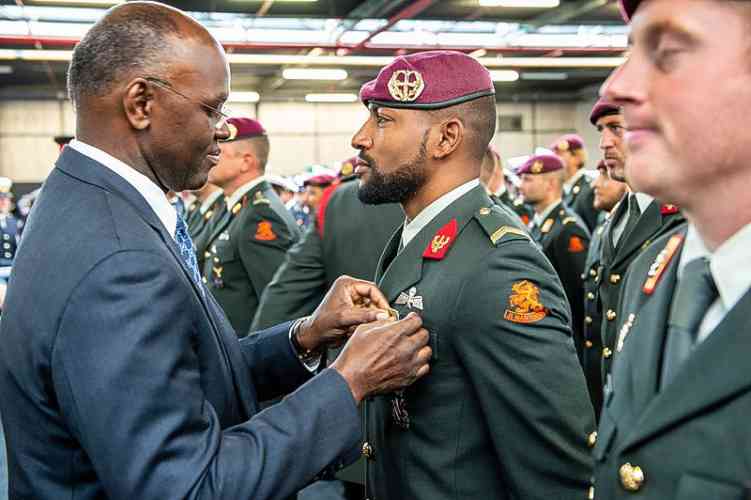 NIJKERK–More than 1,100 military and civil relief workers received the Remembrance Medal for Humanitarian Assistance in Disasters from St. Maarten Governor Eugene Holiday, Dutch Minister of Defence Ank Bijleveld-Schouten and top officials of Defence and the National Police, in the Dutch town Nijkerk on Thursday.

The relief workers who provided assistance before and after Hurricanes Irma and Maria in the Windward Islands and Dominica were from several units of the Royal Navy, Royal Marines, Royal Air Force, Royal Marechaussee, National Police, Urban Search and Rescue, and the different Dutch ministries.
Governor Holiday thanked the relief workers and extended a very special salute to those who served in St. Maarten during and after Hurricane Irma. “I know that the people of St. Maarten and every one of you who were there will never forget the devastating force of this hurricane. Opposing this devastating force of Irma was the greater willpower of the St. Maarten people and the greater will and spirit of the countries in the Kingdom to support St. Maarten,” he said in his speech.
Holiday mentioned the military assistance, but also the support from the civil mission, help with collection drives and assistance to provide temporary housing for schoolchildren. “We can all be proud of this as citizens of the Kingdom – proud of the men and women of Defence, the Police Forces of the Netherlands, Aruba and Curaçao. You were ready to help and you came to assist our people in need.”
He mentioned the extensive work the relief workers had carried out: the clearing of debris and of roads, the securing of checkpoints to maintain order and safety, the evacuation of people, the repairs to schools, the hospital, roofs of people’s homes and the distribution of water and food.
“You brought us essential connections and relief goods: the Air Force with its aircraft, the Navy with its ships Pelikaan, Zeeland and Karel Doorman. These emergency operations, together with the reconstruction funds of the Dutch government, have largely contributed to where St. Maarten is now. This support, these operations have made a big impression and will remain in the memory of the population for a long time,” said Holiday.
Profusely thanking everyone for their hard work and dedication, Holiday said: “You were called and you came to our assistance warm-heartedly showing the will to support St. Maarten. This brings us together in the Kingdom and it makes us stronger together.”
Minister Bijleveld-Schouten lauded the relief workers for their hard work, dedication and teamwork. She quoted one of the relief workers about the work in St. Maarten after the hurricane: “You just go for it. You get up at 6:00am, eat something and then it is full speed ahead until it gets dark, every day.”
She used the word “proud” to describe how she felt about the input of the more than 1,000 relief workers. “Proud: that is the best word to use – proud as human being, as a Dutch citizen and also as Minister of Defence.”
Bijleveld-Schouten said the relief workers had given the St. Maarten people some hope so they could continue the work. “Or, as a St. Maarten resident told you: We are down, but we are not out!”
She praised the relief workers’ mentality. “You continue where others stop – for society, for the people in need.” She also thanked the relief workers families, for whom it was not always easy to stay behind on their own. “Without your support, there are no missions.”
The emergency assistance in St. Maarten lasted from September 5 to November 28, 2017. At the height of the operation, in the time shortly after Hurricane Irma, there were more than 600 military personnel in St. Maarten, while another 400 provided support from the ships and from Curaçao and Aruba.
The Navy brought more than 1,300 tonnes of relief goods to St. Maarten and another 400 tonnes to Dominica. The HMNLS Zeeland, the station ship in the Caribbean at the time, and the HMNLS Pelikaan stationed in Curaçao provided extensive assistance. The Marines deployed two Marine Combat Groups and troops that were stationed in the Caribbean to maintain public order and to distribute water and food. Specialist marine engineers, the Genie, helped with repairs.
A C130 Hercules of the Air Force flew between Curaçao and St. Maarten with relief goods and transported persons. A platoon of the Marechaussee carried out police tasks. Several police units provided support to the St. Maarten Police Force, and to this day continue to do so.
The Urban Search and Rescue from the Netherlands, a unit consisting of persons from the Fire Department, Ambulance Service, safety regions, Defence, Police and the Medical Centre Haaglanden, carried out the coordination of the emergency assistance, humanitarian assistance and the support of civil emergency services.