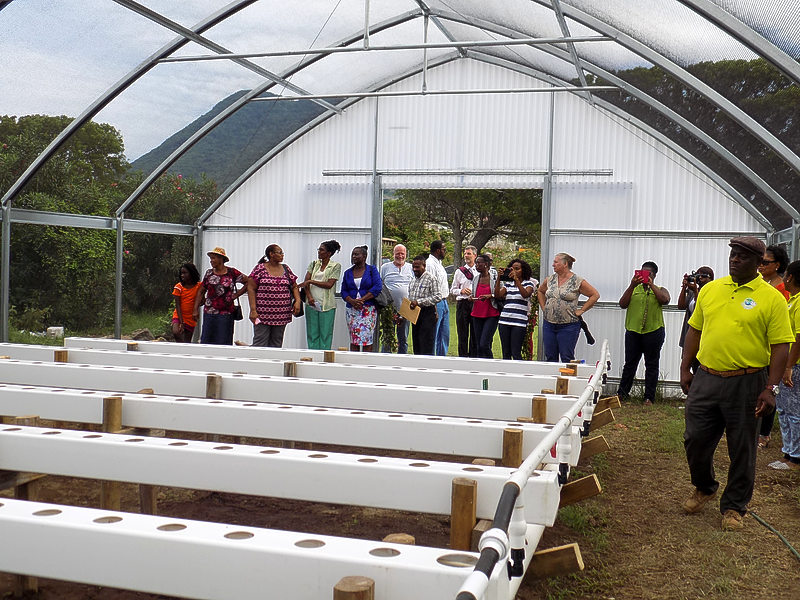 ST. EUSTATIUS–A hydroponics project headed by the agriculture and livestock department LVV was officially opened in Fairplay, St. Eustatius, by Commissioner Astrid McKenzie-Tatem in front of a large gathering eager to see the garden. She cut the ribbon made of coralita vines with a pair of construction shears.

LVV Head Anthony Reid said residents would, in the future, be able to eat fresh vegetables grown in the garden created on land provided by Government.

Francine Foe of New Challenges Foundation said the memorandum of understanding signed at the opening among three organisations was to formalise the collaboration in place since August. Also signing the MOU were Mckenzie-Tatem and St. Eustatius Business Association (STEBA) President Winston Fleming.

“It is significant that we are strengthening our cooperation and collaboration especially at this time to boost agriculture on our Island and food security,” Foe said.

New Challenges Foundation is the executive agent on behalf of Government for second chance education and job programmes. The Foundation provides adults with educational opportunities and gaining skills to obtain meaningful employment.

Gene Herbert, Cedarion Courtar and Timothy Heyliger are participating in the hydroponics project. The training will be conducted by Stuart LaPlace, a science lecturer of the Clarence Fitzroy Bryant College Department of Biology, Environmental Science and Plant Research. The training objective is to demonstrate the effective use of hydroponics farming as a science and as a business.

Herbert explained that pipes and cups had been used to place seedlings in, with the result being fresh grown vegetables.

LVV Director Roy Hooker and others were seen at the opening enjoying fresh peanuts and other produce.

Brooks, one of the planters, gave a tour of her plot in the garden. She said the recent weather had been very helpful with the growth of crops.