Home Local News ‘I was God and she was Satan,’ says suspect in stabbing case 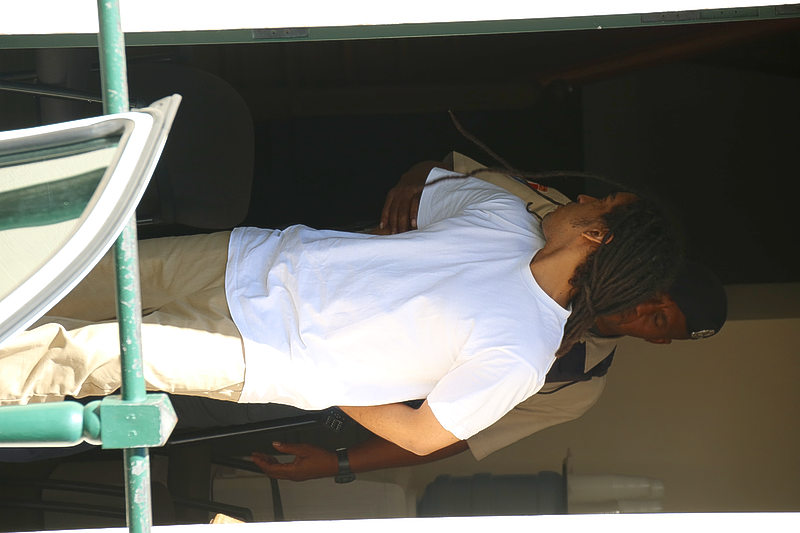 PHILIPSBURG–The man who stabbed Coca Cola Distributer CC1 Managing Director Iris Delgado in her office on Friday, August 19, appeared in court on Wednesday to answer the charges brought against him. J.R. admitted to the court that he was under the influence of marijuana on that day.

“Your honour, I am sorry for what I did. I was high that day and smoked four joints and I think somebody put something in my weed, because I did not feel like myself. When I saw Miss Delgado, I saw that she was Satan and I was God and I had to protect the world against her,” stated J.R. to the judge on Wednesday, explaining his actions on the day of the stabbing.

J.R. made his way to an upstairs office after working hours and asked an employee to kiss him. After she refused he forced her to kiss him and walked to Delgado’s office. He stated that he had come to kill her and started attacking her in the office. Workers still in the building heard the noise and came to Delgado’s aid. Police were alerted and J.R. was arrested on the spot.

The suspect also admitted that he has a marijuana addiction. “I get three pills a day from the Mental Health Foundation just to help me with my addiction, Your Honour. I am very sorry and I don’t know what came over me. Please let me out of jail so that I can work and support my sick mother,” J.R. said.

Delgado’s lawyer Hedy Kockx represented her client in court and read her emotional statement. “I wish I could have been present at the court hearing and stand before you in person today to explain the impact the attack had on my life, so the sincerity in my voice could be heard. Unfortunately, I am not mentally able to confront my attacker, so I asked my lawyer to read my statement for me instead.

“I am terrified in public, almost convinced that someone will come and finish the job that the suspect started. I call it a job because I almost know for a fact that he acted upon instruction. He has no reason to hate me. I never had a conversation with him besides ‘Good morning’ and ‘Good afternoon.’ His contract was extended, so he really had no personal reason to be mad with me,” stated Delgado.

“I, however, know someone who tried to ruin my name and reputation and wanted me off the island badly because the company CC1 decided to not continue a sponsorship. This occurred in the same time that I got attacked and the person instantly got what he wanted: I left St. Maarten by air ambulance the day after the attack and I only came back to the island to pack my belongings and leave one time again.”

“I was finishing up my work,” Delgado’s statement continued. “Everyone in the office had left already and the cleaning worker had turned off all the lights. Only the light in my office was on. This can be seen from the warehouse. The suspect therefore knew that I was alone upstairs.

“A few days before he started to tell his co-workers goodbye and he continued to do so that Friday. I now believe he told everyone goodbye because he planned on attacking me. He waited until all the lights were off before he came upstairs. When he went upstairs he did not expect the receptionist in the storage room. She should not have been there at that time. He hugged her and I believe he wanted to tell her goodbye also.

“At least, that’s what I understood from the private investigator that CC1 had hired. When I heard a noise, I went outside my office to see who was there. At that moment the suspect came running to me instantly and stated that he came to kill me. He started to beat me right away, in my face and on my body. I was trying to block the punches with my hands.

“He kept beating me for a long time until he pulled a knife. He stabbed me all over, in my face, my head, my arms, body and legs. Especially my left shoulder was dug out; it wasn’t just a normal stab, in and out the flesh. He was actually digging a big hole in my shoulder, damaging the muscle and fracturing the bone.

“I tried to drag myself back in my office, hoping that I could lock myself in somehow. I didn’t make it and he continued stabbing and beating me. After a long while other warehouse workers came upstairs and they pulled him off of me. I know I would have been dead if no one had come upstairs to stop him.”

The former CC1 Director continued describing her bad experiences that took place after the stabbing, in her statement to the court on Wednesday. “I was brought to the hospital where I received surgery. I remember making a statement to police while I was on morphine.

“I was flown out of St. Maarten that same weekend and received more surgery in Puerto Rico. I stayed 1½ weeks in the hospital, after which I received full-time care at home for almost three months. My days since then are filled with doctors’ visits.

“I am still treated by nine different doctors and more surgery has to be done. I do not leave the house for anything else. I am scared, even in Puerto Rico. I am not able to work anymore and my social life is non-existent. I am stuck to the house and do not even dare to go for groceries by myself.

“I can hardly dress myself, as I am unable to lift my shoulder. I am in constant pain. Watching myself in the mirror reminds me of the brutal attack. The scars are hard to hide and I see people wonder what happened to me. I take a lot of medication for the pain and in an attempt to stop the anxiety. All those drugs make me drowsy during the day and I can’t sleep at night. So I take more medications to get rest in the night.

“It’s hard to wrap my head around what has happened. I was doing my regular job in my trusted and secure environment. There was nothing I could have done differently to prevent this. I should have been safe.

“There is no sentence that can take my fears away, but I hope that justice will be served. I do not believe that he did not know what he was doing. His goodbyes to colleagues, the fact that he waited until all the lights were out except the one in my office and his clear statement that he came to kill me seems to me as pretty calculated.”

Delgado is requesting a pain-and-suffering settlement of US $20,000.

The suspect maintained after hearing the lengthy statement that he has no recollection of what he did that night and continued requesting that the judge allow him to go home.

The court could not continue with the case because a psychiatric evaluation still has to take place. The case was postponed until February 22, 2017.