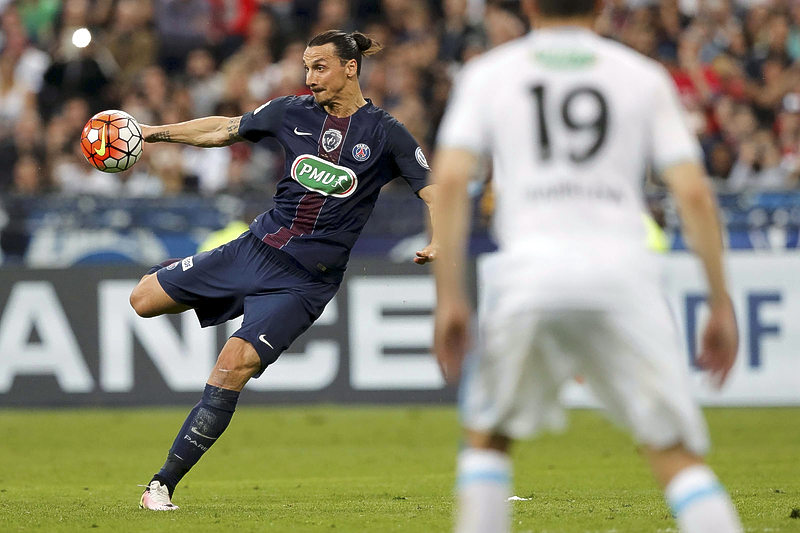 PARIS–Zlatan Ibrahimovic bid farewell to Paris St Germain in style by scoring twice and setting up another as the French champions completed a second successive domestic treble by beating Olympique de Marseille 4-2 in the French Cup final on Saturday (May 21).

Marseille’s Florian Thauvin cancelled out Blaise Matuidi’s early opener in the first half, but Ibrahimovic, playing his final game for the club, took the game away from PSG’s bitter rivals after the break. The Sweden striker scored from the spot before teeing up Edinson Cavani and then adding another late goal to wrap up PSG’s 10th French Cup title.

They had already won the Ligue 1 and League Cup trophies. Marseille, who scored a second goal through Michy Batshuayi, were looking to salvage a mediocre season after finishing 13th in Ligue 1, but PSG were simply a cut above.

PSG went ahead after just two minutes when Matuidi latched onto Angel Di Maria’s cross. Marseille hit back 10 minutes later when Thauvin fired a low shot past Salvatore Sirigu to equalise. PSG upped the pace in the second half and after just two minutes, Nicolas N’Koulou brought down Matuidi in the box and Ibrahimovic converted the resulting penalty.

In the 57th minute, Cavani wrapped it up with a powerful shot after being perfectly set up by Ibrahimovic and the Sweden forward completed the rout after collecting Matuidi’s through-ball to slot past keeper Steve Mandanda. Batshuayi reduced the arrears three minutes from time.