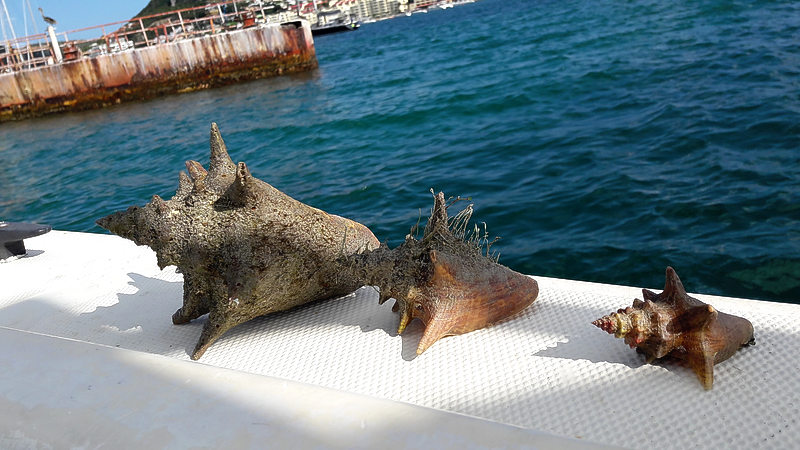 SIMPSON BAY–Nature Foundation has recently found numerous immature conch being harvested in the anchorage zone of Simpson Bay. Its research has determined that seventy per cent of the harvested conchs did not form a so called “flared lip” and are considered to be immature; the remaining thirty per cent had a recently formed lip but are also still not mature.

On St. Maarten, a licence is required and there is a minimum size regulation of 180 millimetres in shell length for fishing on queen conch (Lobatus gigas) bases, however, these regulations still allow for the harvesting of immature conchs.

Nature Foundation has therefore suggested to Government that based on its recent findings fishing regulations need to be revised based on lip thickness instead of shell length. The Foundation is significantly concerned about the harvest of immature queen conch, especially considering that conch stock on St. Maarten is already depleted and at risk of becoming non-existent.

Queen conch have been heavily overfished in the Caribbean due to uncontrolled harvesting and increased demand and are listed in Appendix II of the Convention on International Trade in Endangered Species of Wild Fauna and Flora (CITES) since 1992.

In order to protect conch stocks from overexploitation it is very important to not harvest immature conchs, to give the animals a chance to reproduce and secure new generations for the future. Harvesting of immature queen conch can cause heavy depletion of the population.

When queen conch are about 3.5 years old the shell length is at its maximum (200 to 300 millimetres) and the edge of the shell lip turns outward to form the flared lip, thereafter growth continues in lip thickness. Maturity in queen conch occurs somewhere after the formation of the lip, however, the thickness of the lip at maturity varies a bit in the Caribbean region.

Studies applicable to the region found that only 50 per cent of the population is mature at a lip thickness of 10-15 millimetres, which indicates that the harvested conchs found by the Foundation are all immature.