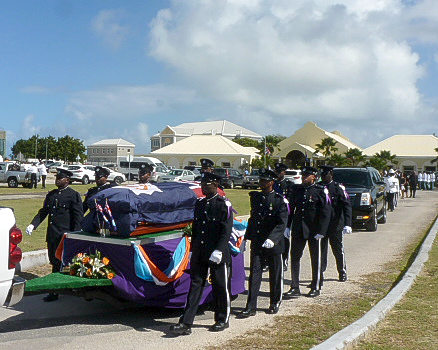 ANGUILLA–Hundreds of Anguillians and many dignitaries from overseas attended the funeral service and burial of James Ronald Webster on Friday, January 13. The procession left Atlin Naraldo Parliamentary Building at 11:00am, where the Father of the Nation had been lying in state for three days.

It was led by the combined Royal Anguilla Police Force Community Band and a contingent of the Royal Antigua and Barbuda Police Band. The firing party, the gun carriage flanked by the Bearer Party, the mourning party, the hearse, clergy, dignitaries of Anguilla and overseas, prison officers, and the cadet corps followed. The procession went along the main road to St. Mary’s Anglican Church through the main road that was lined with 500 school children.

The service was led by Reverend Bishop Errol Brooks assisted by other clergy. A eulogy was presented by Yvonne Webster-Payne, who gave an account of Webster’s life and a summary of his achievements. She noted that he lived in St. Maarten from the age of 10, and after his years there, he returned to Anguilla, as he was appalled at conditions on the island. She described him as humble and compassionate, and a very religious man who fearlessly led the Revolution.

Chief Minister Victor Banks offered condolences on behalf of the Government and people to the wife and family of Webster. He described Webster as the undisputed leader of the Anguilla Revolution, and the first Chief Minister of Anguilla. Banks said Anguilla is honoured and grateful to the many persons, who travelled from overseas to be present for the occasion.

The sermon was given by Bishop Brooks, who described Ronald as a Pioneer of the Revolution, who had courage and perseverance that will be long remembered. He said it is fitting to pay tribute to the Father of the Nation, and now the present population must build on it.

He said leaders are servants of God, and suggested that leaders must set an example; that God must be given pre-eminence in our lives. He stressed that God has given us a beautiful island, and we must all seek to preserve it.

Overseas dignitaries attending the funeral of the late James Ronald Webster included Colin Murdoch from Antigua, Lt. Governor Osbert Potter from the US Virgin islands, Premier Orlando Smith from the British Virgin Islands, and Didacus Jules from St. Lucia, Director General of the OECS. Sir Kennedy Simmonds from St. Kitts, as well as Jonel Powell and Michael Morton, who were also in attendance. A large contingent from St. Maarten included Governor Eugene Holiday, Prime Minister William Marlin, Marcel Gumbs and six others. Will Johnson from Saba was also in attendance.

The congregation included Governor Christina Scott, members of the House of Assembly, senior members of the public service and many other prominent figures in the community, and of course, family and friends.

After the service, the procession, with school children again lining the streets, proceeded to Pope Hill, where a beautiful mausoleum has been constructed on a rocky outcrop. It was specially built for the interment of the Revolutionary Leader. The architect and project manager Vanburn Andy Brooks and his team have been congratulated on building the mausoleum in such short time, as the project only began on December 22. Reportedly they worked far into the night to ensure its completion.

After the interment, members of the public were allowed to enter the Mausoleum.