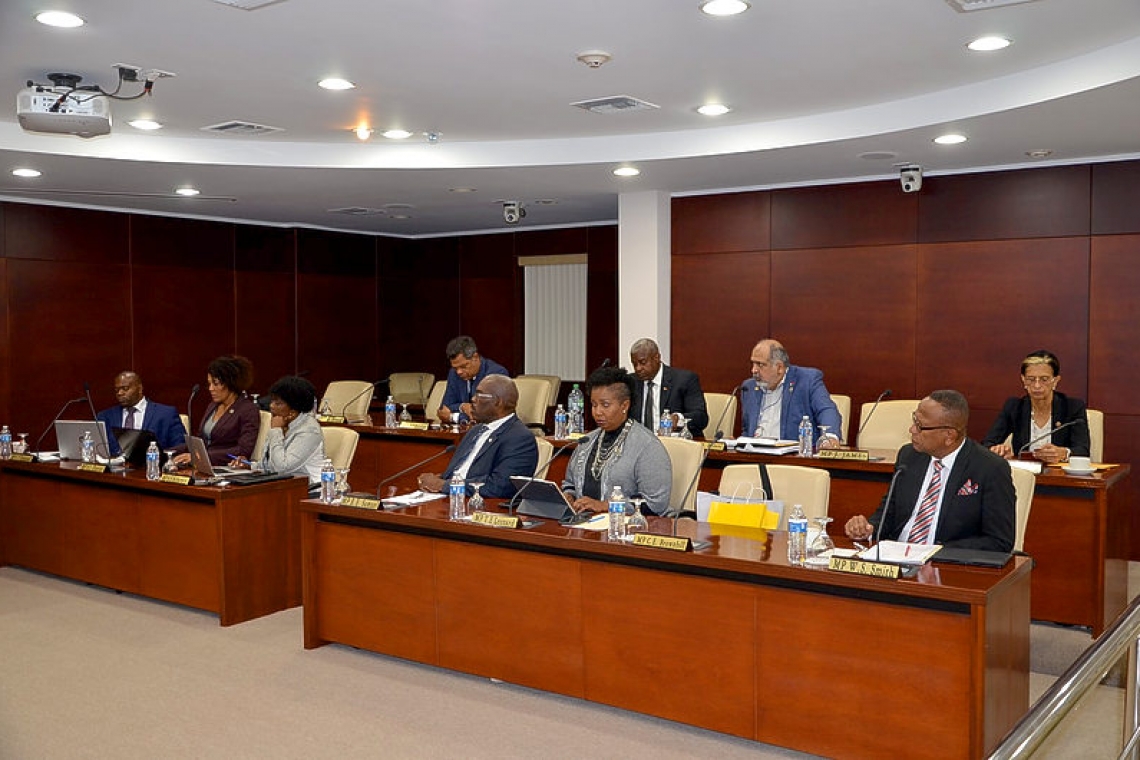 MPs during the meeting.

PHILIPSBURG–Incoming Members of Parliament (MPs) were urged to put St. Maarten first in their decisions once they take up their new positions in the legislature.

The advice came from some of the sitting MPs, who will not be returning to the legislature after February 10, when the new Parliament is expected to sit.

St. Maarten Christian Party (SMCP) MP Wycliffe Smith said he hoped that the incoming MPs think of the next generations as they serve the people of the country in the House of Parliament. He also expressed hope that the coalition and opposition work in the interest of St. Maarten and its people and put “country above self.”

“The opposition is not just there to oppose all that comes from politicians or government. If legislation, plans and proposals are in the best interest of the people; then the interest of the country and people should prevail above party and self-interest,” Smith noted.

He stressed that St. Maarten is looking for a Parliament that will last for an entire four-year term and looking to the House of Parliament for direction and guidance to set the tone for integrity and high work ethics.

Independent MP Franklyn Meyers, who said he was initially not going to speak, expressed hope that the new parliament sits for its entire four-year term. “The record shows that when we have stability in government, St. Maarten does well. We cannot continue to do the same thing over and over and expect a different result,” he said, adding that “outside interference” in St. Maarten’s affairs “must stop.”

“If a person puts themselves on a list and they are elected, they are the person who is responsible for the people of St. Maarten,” he noted.

He told the incoming MPs that their roles will not be a walk in the park. “Governing is hard. Let no one tell you otherwise… You cannot benefit from not making a decision. Opposition has a role and government has a role to play, but at the end of the day, a decision must be taken,” he said noting that there will be times that unpopular decisions will have to be taken “for the greater good.”

“Nothing is more liberating than a hard day’s work. St. Maarten has come a long way from an isolated island where no one wants to come to the mecca of Caribbean…. If we want to go forward this is something that we will have to continue to do. Engineers built the titanic and it sank. People who were not engineers built an ark and it floated. It is your love for your country that will push it forward. Make every decision to push St. Maarten forward and not for your individual self,” said Meyers.

Leonard said she feels comfortable with the new MPs that are coming in as they are of a “different breed.” “I think when I came in, I brought a different breath of air and since 2014, there have been younger people who wants to make a difference.”

United Democrats (UD) MP Tamara Leonard urged the new parliament to follow up on the initiative laws that she initiated or that were passed during her tenure. She too had some positive advice to share with incoming MPs during her remarks.

All three MPs thanked a list of persons who in one way or another had a positive impact on their role as a politician and an MP.