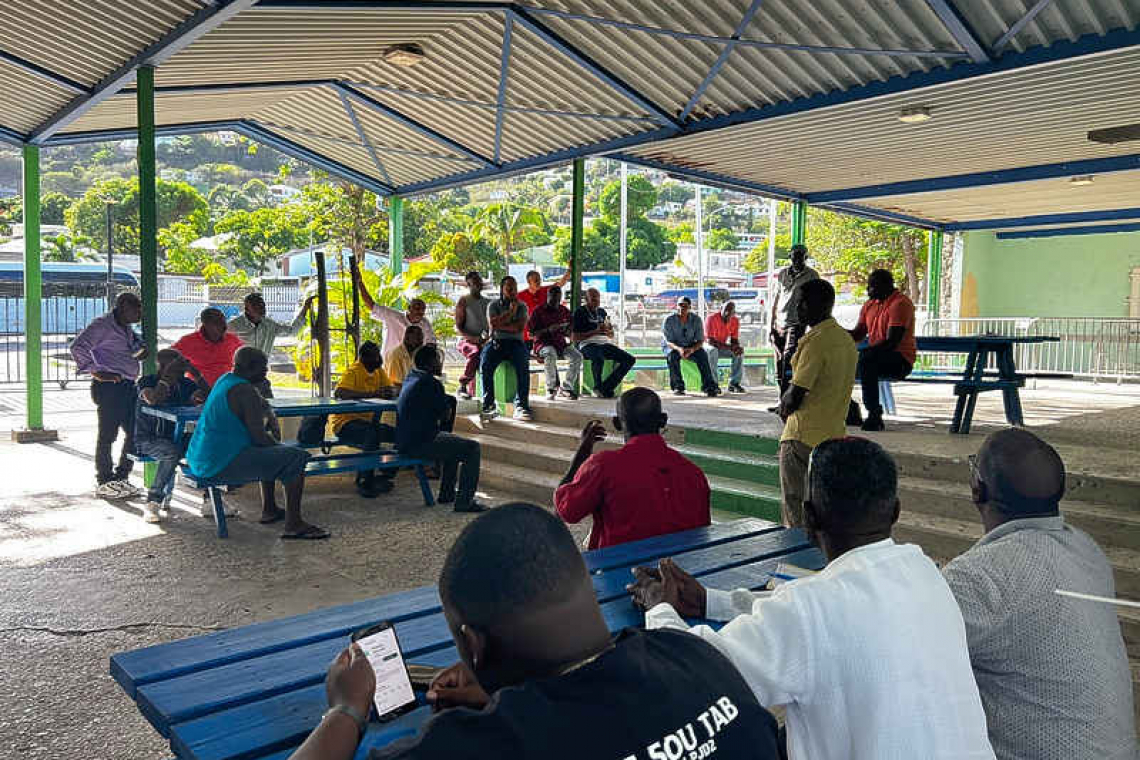 A scene during Sunday’s meeting.

Bus drivers, help chauffeurs and permit holders attended the meeting in large numbers. Acting Minister of Tourism, Economic Affairs, Transport and Telecommunication (TEATT) Omar Ottley and his support staff were amongst those present.

Bus Drivers Association President Claude Omeus told The Daily Herald after the meeting that the association will be meeting with the minister on Wednesday.

Participants discussed various issues and proposed changes in the industry, including cooperation between the Dutch- and French-side bus drivers’ associations, and updating the bus registry for border crossing. Omeus and his board also presented Ottley with a list of proposals that had been submitted to former TEATT Minister Roger Lawrence for amendments to the public transportation ordinance.
Haitian Association of St. Maarten HASMA representatives, who attended the meeting as observers, said in a press statement last night that HASMA had lent its support to the bus drivers and their associations during their general meeting with Ottley at MPC on Sunday afternoon.

According to HASMA, Ottley agreed to further investigate the issues presented and proposed an urgent meeting with the representatives of the various bus associations later in the week.

HASMA said it had been invited to the meeting as an observer as a way to familiarise and hear first-hand the bus drivers’ concerns. The public transportation sector is operated by approximately 85% of Haitian nationals/descendants, many of whom must self-rely to solve issues like medical coverage, immigration, etc., it was stated in the release.

“We must be aligned on our approach towards the government. For too long the bus network and the social issues of the bus drivers here on the Dutch side have been overlooked,” said one driver.

“HASMA stands in solidarity with the bus drivers, we are pleased to see they have chosen an organised manner to amass, document, and present their issues to the government of St. Maarten. We look forward to the authorities taking a serious look at their concerns and their submitted proposals and find common ground on a way forward on all points mentioned.

“We do hope their issues are given the proper attention they deserve. After all, they are the public transportation industry of our country,” HASMA Vice President Fabio Doralice said.

“As the president of the United Bus Drivers Association that has the majority of the bus drivers registered, it is my responsibility to see after my drivers. They are the ones on the road every day, making sure public transportation continues to run in these hard times,” added Omeus. “They too have issues, they too feel the pinch. We are calling on the relevant authorities to review our proposals and to hear our plea.

Omeus had said last week that bus operators were encountering difficulties in earning an income to cover the cost of gasoline and maintaining their vehicles.